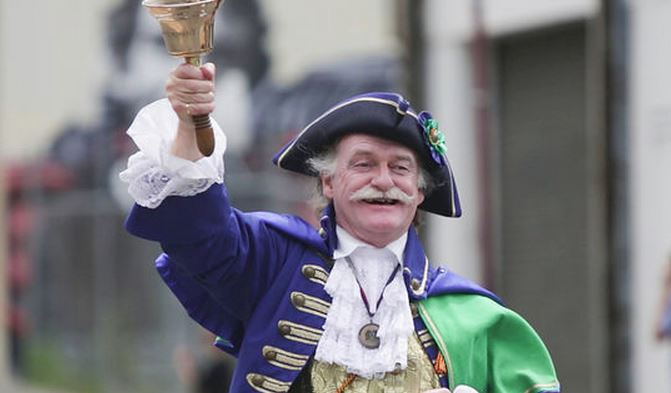 Friday, May 8, marks the 75th anniversary of VE Day, the day on which the end of the Second World War in Europe was announced.

With major public celebrations of the milestone cancelled all over the world due to COVID19, Central Coast Town Crier, Stephen Clarke, is set to make a solitary proclamation marking the occasion at 3pm at the Wyong Town Park Memorial.

“Originally, I was going to be part of a major event planned at Gosford RSL, which was to be attended by politicians, military personnel and Council representatives,” Clarke said.

“Due to COVID-19 the event was cancelled, but I felt it was really important to go ahead with proclamation anyway, to honour those who made sacrifices for us.

“There won’t be anyone else there, except perhaps my wife, but I will be dressed in full regalia and will deliver the official proclamation as a mark of respect.”

Clarke said he and around 30 other Town Criers around the country had answered a call from Queen Elizabeth II’s Pageant Master, Bruno Peek, in London, to still do the cry.

“It was at 3pm on Tuesday, May 8, 1945, that Winston Churchill, the then British Prime Minister, officially announced the end of the war in Europe and declared it to be VE Day,” he said.

Clarke is celebrating his 30th year as the region’s Town Crier, first for Gosford Council and now for Central Coast Council.

He has represented the region at numerous national and world Town Crier championships, and is a five time winner of the national title.

But celebrations of the nation’s veterans are especially meaningful to him.

“I remember that in 2018, I participated in a major Remembrance Day celebration with 115 Town Criers all over the world, marking the 100th anniversary of the end of WWI,” he said.

On ANZAC Day this year, Clarke played the Last Post and read The Ode on his own driveway.

“I think we had everyone in our street in their driveways with candles that morning,” he said.

“Some even had flags draped over them.

“I am always there to participate when honouring the people who gave us this life we enjoy.”

Meanwhile, Minister for Veterans’ Affairs and Defence Personnel, Darren Chester, said the announcement of Victory in Europe was a cause for “great celebration” in the Allied nations and meant that thousands of Australians could return home.

“In Australia, celebrations were undertaken excitedly, but with the knowledge that, closer to home, the war in the Pacific against Japan was still to be won,” Chester said.

“The depth of relief was reflected by the estimated 100,000 people that attended a service at the Shrine of Remembrance in Melbourne the following day.

“Tragically, more than 10,000 Australians were killed, nearly 10,000 more were wounded, and almost 8,000 became prisoners of war in the war against Germany and her European allies.

“This year, on May 8, we pause to remember the significance of the Allied victory in Europe and the men and women whose service and sacrifice helped bring about Germany’s defeat.