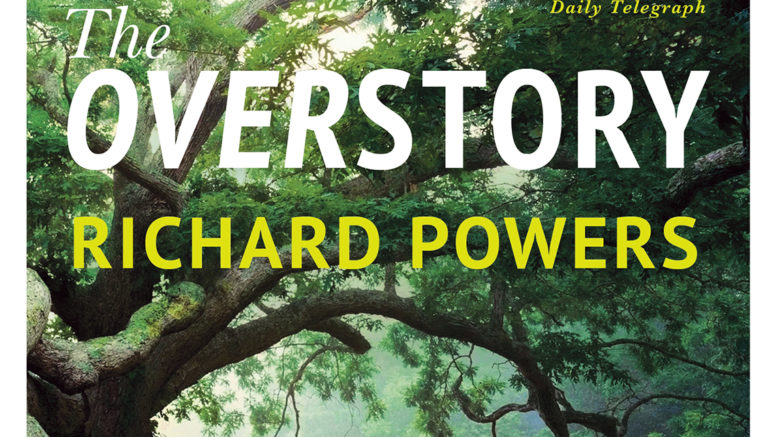 As I was reading The Overstory the word understory kept appearing, so I finally looked it up and found out that it means a layer of vegetation beneath the main canopy of a forest.

Then it dawned on me that I should probably look up the word overstory (not one of my brighter moments).

Surprise, surprise … overstory is “the layer of vegetation in a forest canopy”.

The Overstory is broken up into sections – Roots, Trunk, Crown and Seeds.

In Roots we are introduced to the characters that will make up this epic novel and this chapter really got me in.

The first is Nicholas Hoel, descendant of a Norwegian immigrant who married an Irish girl in Brooklyn and set off to settle in the new state of Iowa, bringing along the seeds of a chestnut tree.

We meet many generations of the Hoels and see how the grand chestnut tree grows where chestnuts aren’t supposed to.

We then meet Mimi Ma, one of three sisters who like to climb the mulberry tree their parents planted in their backyard and eat their fill of mulberries.

Adam Appich’s family planted a maple tree for him when he was born.

His siblings’ trees are elm, ash and ironwood.

His sister, Leigh, who’s tree is the elm, disappears when she goes to Lauderdale for spring break.

Her elm tree died just before that.

There is also Ray Brickman and Dorothy Cazaly who marry and start planting trees each year of their anniversary.

But the years pass, and they forget.

Douglas Pavlicek is a vet and while serving his country the plane he is in goes down – a banyan tree breaks his fall.

Neelay Mehta is obsessed with computers.

After a confrontation with his teacher bring his family shame, he falls out of a neighbour’s encina tree while pondering his fate.

Patricia Westerford’s father takes his young daughter with on his travels and teaches her to love trees and see how much man has come to ruin them, while Olivia Vandergriff is a senior in college, too self-absorbed to notice the tree in front of her house “that once covered the earth – a living fossil, one of the oldest, strangest things that ever learned the secret of wood.”

Each chapter in Roots read like a short story, and that is what I thought the book would be – a series of short stories.

However, in Trunk the characters become intertwined … very cleverly, just like the connections between trees.

Powers highlights the vastness of time and space with each human life appearing as little more than a ring on a great tree’s trunk.

But then came Crown and, well … things went downhill a little for me.

I felt the story was going on way too long and descended into some weird places.

At this point I was reading just to finish it.

The Overstory (or as I like to call it, “everything you wanted to know about trees but were too afraid to ask”) is a depressing book, albeit a timely one, especially given the great loss of wilderness in the recent bushfires.

It is well written for the most part and was in fact shortlisted for the 2018 Booker Prize and won the 2019 Pulitzer Prize for Fiction.

The Guardian however was not so kind.

Key characters don’t converge to the central story, it hectors the reader and, he says, descends into increasingly absurd melodrama: “just the kind of crash-bang bollocks that makes bad comic-book adaptations so repetitively dull. Helicopters! Bombs! Fires! Trees falling down all over the place! People getting messages from the trees! People having massive – and massively unlikely – epiphanies!”

He goes on to say that “The Overstory is undemanding – it asks nothing of its readers, nothing beyond the page that isn’t spelt out for us.”

And while I don’t want to be too critical of a well-intentioned book, it just wasn’t for me either.