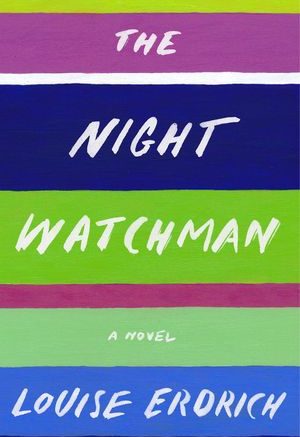 In 1953, the Unites States Congress announced a Bill to annul nation-to-nation treaties which had been made with Native America Nations.

The Night Watchman is set against this backdrop.

Thomas Wazhashk (the Chippewa word for muskrat) works hard by night providing for his family, working as the night watchman for the Turtle Mountain Jewel Bearing Plant.

By day, the Turtle Mountain tribe women work at the plant preparing jewel bearings that will be used in the Defense Department and Bulova watches.

It’s a big deal that the factory was built on the reservation – it gave a lot of people jobs.

Thomas is a member of the Tribal Council and is fighting the Congressman who wants to pass a Bill to cut the Turtle Mountain Band of Chippewa off from their land – “emancipation” as they call it.

“But they were not enslaved. Freed from being Indians was the idea. Emancipated from their land. Freed from the treaties that Thomas’s father and grandfather had signed and that were promised to last forever. So as usual, by getting rid of us, the Indian problem would be solved.”

One of the workers at the factory, his niece, is Pixie Paranteau, who prefers to be called Patrice.

Her father is a drunk; Her older sister, Vera has gone off to Minneapolis with her new husband; Her younger brother, Pokey, is taking boxing lessons from Lloyd Barnes (who fancies Patrice); and her mother, Zhaanat is a traditional Indian raised by her grandparents and only speaks Chippewa.

Zhaanat’s job is passing on what she knows to people all over the land.

As a result, Patrice, is the sole provider for her family – she is also the first person in her family to have a job, “not a trapping, hunting or better-gathering job, but a white-people job.”

Smart, beautiful and independent, Patrice prides herself on being the best at the intensely intricate work of laying slivers of jewels into tiny keyboards for watches.

She provides for her family but puts a little bit away each paycheck in order to find Vera.

While Thomas takes on the government, even reading the Book of Mormon to look for clues to the mindset of the author of the Bill, Patrice heads off to find Vera.

She is unused to cities and meets an unsavory group of people, include some who strong-armed her into a job in a nightclub that requires her to wear a blue rubber cow suit and swim in a tank as a female “Babe” in the Paul Bunyan story.

She also uncovers disturbing clues in her quest to find out what has become of Vera.

This is a wonderfully written book.

Louise Erdrich is part Chippewa and an award-winning author (beginning with “Love Medicine” that won the National Book Critics Circle Award in 1984), whose writing introduces readers to unforgettable Native American characters, most notably through her Pulitzer finalist “The Plague of Doves” as well as “The Round House” and “LaRose”.

The Night Watchman particularly highlights the ruinous treatment by the United States of its native people and how they tried to erase their culture and history.

Thomas is based on Edrich’s own grandfather, who testified before Congress against the Bill, but the story is even more memorable for the engaging, tingling story of Patrice’s independence and sexual awakening, the joys of workplace girlfriends, and the building tension of Wood Mountain’s boxing fight and the larger battle against Congress.