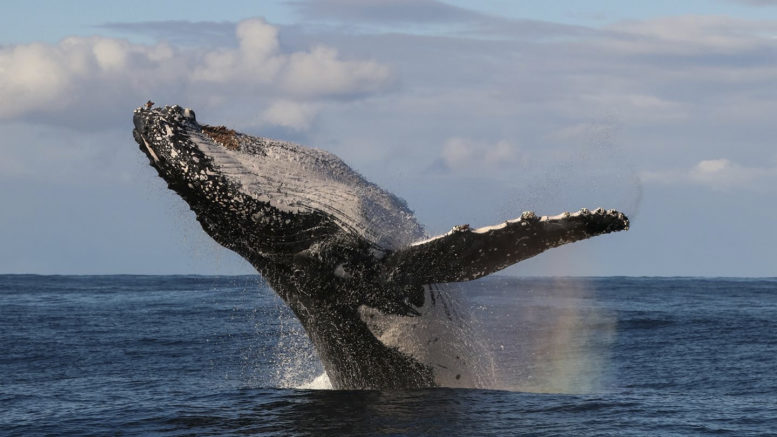 One thing the coronavirus won’t stop is the annual migration of humpback whales as they make their way through waters off the Central Coast headed for warmer climes.

The Dolphin Project spokesperson, Ronny Ling, said some lucky locals had already had a glimpse of the first of the migrating mammals in recent weeks.

“Humpback whales travel over 5,000 km from their summer feeding grounds near Antarctica, to the warmer waters off Queensland and the Coral Sea, to give birth and mate,” Ling said.

“The northern migration will peak in late June and early July, with the whales and their new calves returning on their southern migration from September to late November.

“Over 30,000 humpback whales are expected to migrate north along the east coast this year.

“Their numbers are increasing around 10% each year, but they are still not as abundant as they were pre-whaling days.”

Ling said some of the best spots to observe the whales included Captain Cook Lookout at Copacabana, The Skillion at Terrigal, Cromady Hill at Forresters Beach, Soldiers Beach, Norah Head and Wybung Head.

“Always remember not put your safety at risk, and always stay behind barriers,” he said.

“Whale watching is always the luck of the draw, with weather and sea conditions playing a big part.

“Morning is usually the best time to go, with the rising sun silhouetting the whales’ blow, and the breeze usually at its minimum strength.

“Humpback whales are the most common whale sighted.

“They travel singularly or in pods, which may range from 2 to 8 animals.

“These whales are the most acrobatic of the whale species.

“Their behaviours include breaching, tail and fin slapping, spy hopping and lunging.

“Their blow is quite bushy and around 3m tall.

“Minke whales also migrate at this time of year.

“These are smaller, faster whales than humpbacks.”

Ling said whale watchers might be lucky enough to spot a Southern Right or two around the end of June and the early weeks of July.

“These rare whales were almost hunted into extinction and have been very slow to recover,” he said.

“Killer whales, seals and different types of dolphins have also been known to visit the Central Coast beaches at this time of year.

“If you are on the water, you need to be aware of whale approach regulations, as stiff penalties apply to breaches of the whale watching rules.”

If you see a whale or dolphin, please call the Central Coast Dolphin Project on 0435 348 552, email centralcoastdolphins@gmail.com, or post your sighting on their Facebook page.