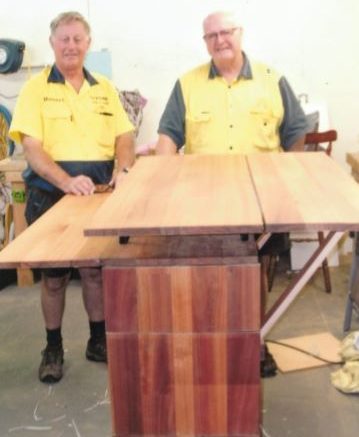 Men’s Shed members with the ‘elephant’

The Mangrove Mountain Community is seeking support to keep their new amenities as is.

According to Kulnura resident, Clara Jones, the hall recently had a new kitchen installed and as part of that upgrade a stainless steel bench was installed.

The new bench was installed against the wishes of hall users who say the taller style of bench was ill-suited to their needs.

“The somewhat taller centre bench around which we normally gathered to work while socializing was gone.

“No one could understand that people with electronic implants do not feel safe working on metal benches, particularly when electronic gadgets are also often in use,” Jones said.

Jones said users then sought permission to install a new bench and were granted it, provided it would meet certain requirements, a challenge in and of itself given users’ own varied needs for the bench.

“We had to fund it ourselves and it had to be store under the shelves, a space about 980mm tall, and about a third of the width that we needed.

“Obviously drop sides would be needed, that could treble the work surface, if one were lower it would cater for the vertically challenged; but how can we get the taller bench needed for the taller people with arthritis?

“We decided it would need wheels to make it easily moved and to make it comply with food handling standards we will need WA specially treated hardwood benchtops, which are expensive and very heavy,” Jones said.

The bench would also need storage space to accommodate the various bits and bobs of users.

All of these features made for an astronomical bill for a custom built bit of furniture and Jones said many users were disheartened by the prospect until they turned to the community for help.

“A friend suggested we try the Wyong Men’s Shed and when approached these angels in hi-vis gear agreed to take on the job.

“They searched the internet for ideas, came up with a few improvements to the original design and even suggested a coat of special lacquer made to comply with Australian food handling standards as an extra precaution,” Jones said.

Men’s Shed members had a hell of a time delivering the piece to the hall but after a bit of elbow grease it arrived at its new home to the delight of hall users.

However, Jones said users have since been informed that their new bench/cupboard combo, affectionately known as the elephant, is in breach of regulations.

“We have been informed that ‘regulations’ mandate that all benchtops must be standard height.

“If so, that is discriminatory, however, ours is standard height until lifted up.

“It appears that ‘regulations’ do not consider the needs of the less able and people with electronic implants who frequently volunteer in community facilities like ours.

“We really appreciate the time and effort the Men’s Shed spent on listening, so they understood the problems, then coming up with such a splendid solution.

“Now we understand we have to demonstrate ‘community support’ to be allowed to keep it,” Jones said.

The Mangrove Mountain community and surrounds are now being called on to help secure the elephant by writing a message of support to ‘Save the elephant’ TMB 2547 George Downes Dve, Kulnura, 2250.