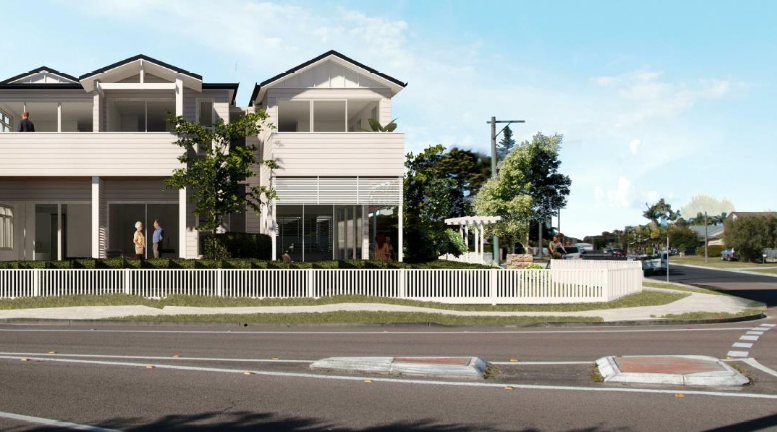 Perspective view of the proposed boarding house from Lindsay St

[Long Jetty] Residents near a proposed boarding house approved at the April 27 meeting of Central Coast Council have failed to get three councillors to back a rescission motion at the next meeting.

The councillors voted to allow the boarding house to be built on a corner block in Long Jetty, but residents urged them to rethink, saying they were denied their democratic right to speak up when the public forum before the meeting was cancelled.

The residents who had asked to speak were told to send in their speeches and these were given to the councillors to read.

But the residents say they don’t know if the councillors read their submissions.

Only two councillors, Cr Bruce McLachlan and Cr Greg Best, agreed to put their names to a rescission motion despite the group attempting to persuade all other councillors who had voted on the issue.

This didn’t include Cr Jilly Pilon or Cr Troy Marquart, who both said they had conflicts of interest and did not participate in the debate or the vote.

A group of residents formed a facebook page in 2019 when the proposal came to light.

They complained that it was an overdevelopment of the site.

The matter almost went through en masse at the meeting until Cr McLachlan asked that it be debated, saying that it was disrespectful to the people who had objected to it to simply pass it without debate.

Cr McLachlan said he didn’t think the site was appropriate for the development.

Each boarding room will contain a kitchen, bathroom and laundry facilities, with a communal room on the ground floor, and a communal private open space area located off this room.

The boarding house has a maximum capacity of 12 people.

Resident, Eric Thorsby, said a number of residents had attempted to call councillors to discuss the unfair and undemocratic nature of Monday’s meeting.

At the time of writing, Thorsby said Cr Chris Holstein and Cr Jeff Sundstrom both answered his call and took the time to explain why they wouldn’t back a rescission motion.

“Many members of the community feel the proper democratic processes were not followed and therefore the decision should be rescinded,’’ he said.

He said under normal circumstances, the DA would have had a huge public forum with many persuasive speeches against and objections actually heard instead of “possibly” read.

“Members of the community could not visually see councillors voting or leaving the room.

“The entire process was very removed from normal council processes and the matter should be reviewed to ensure that this decision is correct.

“Please rescind this motion and bring it back before a vote and fix the democratic issue that is currently robbing our community of their voice.

“Let’s make sure that these COVID19 restrictions are not allowing these developers and politicians to get away with unfair decisions for the next 12 months,” he said.

Objections included that the address did not have the correct zoning to allow this type of development and it didn’t have the required public transport.

Resident, Joel Brown, said he wanted to know how a local council could override the prerequisites of a State Planning policy and approve a boarding house on that size parcel of land.

Resident, Sarah French, said the development was completely out of character for the area.

“And by this I am not referring to the appearance of the building, it’s the fact that it will be eight micro apartments with a shared living space,” she said.

Kristian French added her voice: “The proposed development is completely out of character for the area and does not comply with regional planning zone requirements”.

Grant Ferguson said the community couldn’t believe that the submission had progressed so far.

It is believed that council will read out the public submissions at the next meeting, but council had not confirmed this at time of writing.