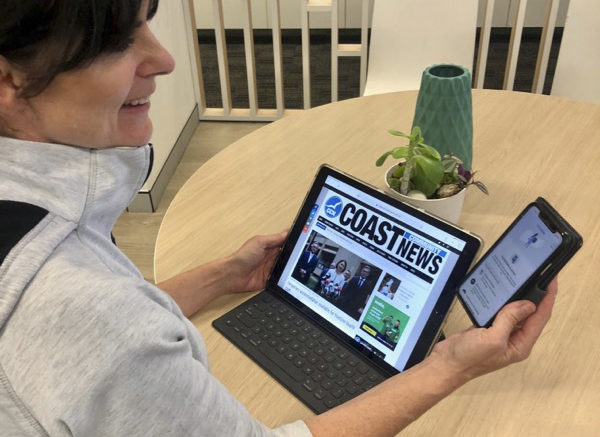 Member for Robertson, Lucy Wicks, is encouraging all Central Coast residents to download the Federal Government’s new coronavirus tracing app, which it hopes will be a key measure in containing the spread of the pandemic.

But the Law Council of Australia’s Gosford-based President, Pauline Wright, says that there are still some concerns surrounding privacy, and is pushing for legislation to be enacted as soon as possible to address those concerns.

The voluntary COVIDSafe app works by helping the government trace possible transmission between users and confirmed cases, with collected data allowing health authorities to quickly contact users who may have been exposed to the virus.

It is expected that this faster identification will lower the chance of transmission between carriers who have recently been infected and who have yet to be diagnosed and the wider community.

Wicks said that as of April 27, more than 2 million Australians had already downloaded the app, with that number expected to climb.

“Residents across the Central Coast are doing an extraordinary job to flatten the curve and contain the spread of the coronavirus, but we cannot be complacent,” Wicks said.

“This app is part of the three key requirements for easing restrictions: Test, Trace and Respond.

“The more people who download this important public health app, the safer they and their family will be, the safer our community will be, and the sooner we can safely lift restrictions and get back to business and doing the things that we love.

When the app recognises another user, it notes the date, time, distance and duration of the contact and the other user’s reference code but not the user’s location.

These interactions are being touted as ‘digital handshakes’ by government officials.

When someone is diagnosed with COVID-19, state and territory health officials will ask them or their parent/guardian who they have been in contact with.

If they have the app and provide permission, the encrypted information from the app will be uploaded to a secure storage system, where health officials will it to support contact tracing.

Health officials will not name the person who was infected.

The Government has also given assurances that all data collected via the app is encrypted with no one able to access it, with the data to be deleted on a rolling 21 day cycle that mirrors the virus’s incubation period.

The data contained in the information storage system will also be destroyed at the end of the pandemic.

The app was launched on April 26 by Federal Health Minister, Greg Hunt, who assured the public that their privacy was of the utmost importance, after digital rights activists and data protection experts raised concerns over the app’s inner workings and potential misuse of the collected data.

“It is also prohibited by law.

“I have already signed into law a Biosecurity Act Determination which prevents access and which ensures that the data has to be kept on an Australian server.

“It cannot leave the country, it cannot be accessed by anybody other than a state public health official, it cannot be used for any purpose other than the provision of data for the purposes of finding people with whom you have been in close contact, and it is punishable by jail if there is a breach of that.”

He said the app’s source code would be released for full assessment.

But Law Council of Australia President, Pauline Wright, said the problem with a Determination instrument under which the app currently operates, is that protections under it can be unilaterally removed or amended.

“We understand that the government is planning to introduce it into legislation at its next sitting in May and that is good news.

“Our concerns at the moment include that there is no provision for oversight and reporting on the app’s use and that there is ambiguity around the period for which the app will be operational and when the obligation to delete information will begin.

“We would also like to see independent oversight by the Privacy Commissioners of states and territories and a robust complaints system.

“There is a potential ambiguity around whether other laws authorising the issuing of law enforcement and intelligence warrants could override the prohibition on access.”

Wright said that there were also concerns regarding the possibility of data being accessed under the US Cloud Act.