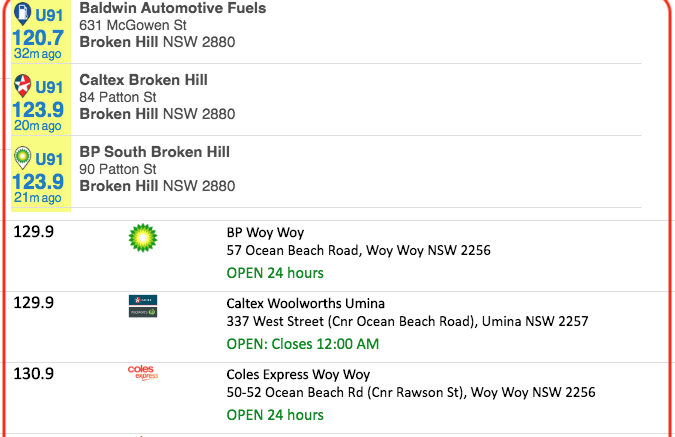 [Umina] Petrol is cheaper at Broken Hill than it is on the Peninsula, according to a Blackwall resident who monitors local petrol prices.

“All I do is post the list of petrol prices on the Peninsula compared to other nearby suburbs and people can make up their own minds, but blind Freddie can see how ridiculous it is.

“You can actually buy fuel cheaper in Broken Hill than at a Peninsula petrol station.

“The figures speak for themselves,” Mr Nash said.

“Like the Shell, Caltex and BP at West Gosford, for example, are all far lower prices, no matter what fuel you buy, they’re all cheaper.

“It will be interesting see whether the new United service station that’s going to open on Ocean Beach Rd will follow the prices of the Empire Bay United where prices are not necessarily the cheapest but still reasonable, or whether it will join the cartel.

“We’ve heard all the reasons from the fuel companies before but none of them hold water.

“To say there is a lack of competition mystifies me – five service stations on the Peninsula sounds like competition to me.”

“The petrol stations on the Peninsula know there are many elderly people on restricted licenses who can’t get their petrol anywhere else and I don’t think the coronavirus crisis has made a difference to prices because they were high before Covid-19 and they’ve been high during the pandemic too.”

Member for Gosford Ms Liesl Tesch said she had written to oil companies to demand an end to appallingly high petrol prices on the Peninsula.

“Despite plummeting global fuel prices, Peninsula fuel prices are sitting over 35 cents per litre higher than Gosford fuel prices and the average fuel price in NSW,” she said.

“Petrol companies have been price gouging Peninsula residents for too long and I’m disgusted by the inaction.

“I’ve written to the Australian representatives of the big oil companies on behalf of all residents and demanded an end to this appalling behaviour.”

Ms Tesch said Peninsula prices had always been higher than others on the Central Coast and she had worked hard to try and boycott the fuel prices, speaking in State Parliament about the issue over the years.

“This recent fuel price stunt by the Peninsula petrol stations has fired me up even more,” she said.

“The entire world is in upheaval, dealing with the global coronavirus pandemic and locally we are experiencing the virus, the fear and the economic downturn, yet petrol companies seem oblivious to the vulnerable communities on the Peninsula.

“It disgusts me to see how these companies are ripping off Peninsula residents who are doing it tough, while local businesses and locals in general are doing their very best to support their community.

“The trouble is that by petrol stations over-charging, they’re hurting the businesses around them because people who go elsewhere to get their petrol will likely be shopping elsewhere too and that is a loss for Peninsula businesses.”

Ms Tesch said the only oil company yet to respond was a “wishy washy” reply from BP saying it was a “geographical” matter.

“The hairpin bend at the bottom of Woy Woy is not a geographical excuse, considering delivery trucks also have to go over Rip Bridge to Empire Bay where the prices are cheaper,” she said.

Ms Tesch said Mr Nash had been following the price hikes for years.

“He’s right – this has been going on for too long and enough is enough,” she said.

“I will continue to fight for a fair price, and I urge you all, if you can, to fill up somewhere else.”

This story appeared first in the Peninsula News print edition # 493

Darug place names and culture on Dyarubbin, the Hawkesbury River