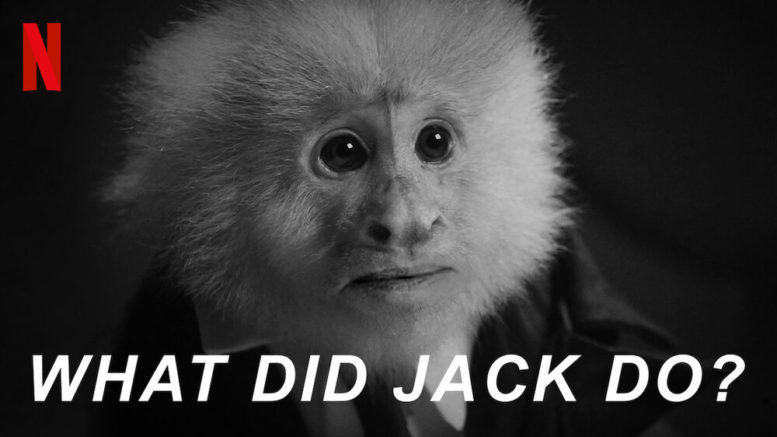 A train station where no trains stop.

A dimly lit room where a suspect orders coffee.

A smoking detective, bent on finding the truth.

And a femme fatale … with feathers.

What else does one need to see the elephant in the room? Or the chicken at the window?

The meaning is clear, is it not?

Jack Cruz (played by himself) is tense, fidgety, as he waits for his train, glancing around frequently at the door.

Something heavy weighs upon him.

His big, wide eyes betray him – something bad has happened.

The detective (David Lynch) interrogates him, suit and tie, drifting cigarette smoke, he tugs at Jack’s conscience to reveal the truth.

He leans forward, almost out of the shot.

Jack’s answers come in a robotic, but defiant, voice from strangely detached lips.

He is evasive, tormented, deriding the detective for his tactics: “You toss an animal on the roof just to see the look on his face.”

Jack eventually admits he has a buck knife and once sliced a ‘gator that was goin’ after a rabbit friend.

But did Jack kill Max?

Was his love, Tootabon, alone that fateful night?

The conversation becomes disjointed – one non-sequitur after another.

The belated arrival of a waitress (Emily Stofle) with Jack’s coffee breaks the tension.

But the detective is not to be thwarted – he knows something.

He knows why the chicken crossed the road … and he’s playin’ for keeps.

Was Jack a card-carrying member of the Communist Party?

He teases Jack with findings of the police report, pushes further until Jack breaks … into song (“The Flame of Love”).

What was the meaning of those lyrics?

There is none, of course.

Which just goes to show nothing good comes from associating with chickens.

What did Jack do? is an engaging 17-minute Absurdist offering from legendary film-maker David Lynch – apparently a 74th birthday present to himself, presented in 2017 at a French film festival and recently picked up by NETFLIX.

It’s not meant to be action-packed, dramatic, or even particularly funny, and it’s definitely not meaningful … just very absurd.

Which is just what Absurdism is meant to be.

Absurdism has its root in The Enlightenment, where the rise of “reason” and human beings’ understanding of the pervasive laws of nature (the Fundamental Laws of science) led people to question whether there was any role left for religion, morality or any actual meaning to an individual’s life.

Following the misery of WW2, Absurdism enjoyed a revival, along with Existentialism which centres on the search the inherent meaning or purpose of our existence.

Absurdism, on the other hand, aims to depict the human tendency to (hopelessly) seek value and meaning in a universe that is just simply vast, chaotic and irrational.

Perhaps the most well-known post-war absurdist text is “Waiting for Godot”.

What did Jack do? may not reach those heights but it is a very different, interesting and, well … quite absurd way to spend 17 minutes.