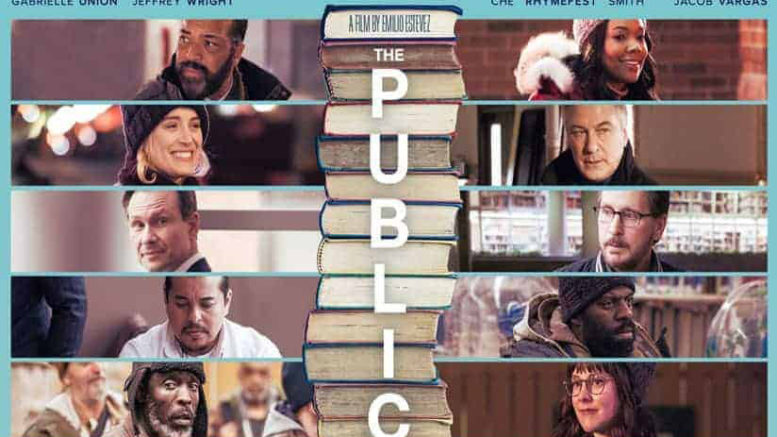 The Public, released in the United States in 2019 and now on Netflix, is an American drama directed and written by (and starring) Emilio Estevez.

Estevez has assembled an impressive cast featuring Alec Baldwin, Christian Slater and Jeffrey Wright and so it promises great things.

For the most part, the film is set in the Cincinatti Public Library where patrons from all walks of life come each day to meet, read, source information or, in many cases, simply to escape the cold.

In response to a brutal Midwestern cold snap, a large horde of homeless people, led by regular library patron Jackson (Michael Kenneth Williams), take refuge in the library and refuse to leave the at closing time.

Librarian Stuart Goodson, who initially tries to eject the mob, finds himself acting as an unwitting spokesperson for the group.

Davis looks to turn the situation to his political advantage by creating a false narrative that the group is being held hostage by Goodson who is armed and unhinged.

The discovery that Goodson has a criminal record and has also just been stood down from his job at the Library adds to Davis’s narrative and strengthens the case for a violent end to the “siege”.

As crowds of on-lookers and media vans join the swarm of police outside the library, Goodson’s co-worker Myra (Jena Malone) and brewing love interest Angela (Taylor Schilling) work with news reporter Rebecca Parks (Gabrielle Union) to present the situation as it really is – a quirky, nervous librarian defending the democratic right of homeless people to peacefully protest against their life-threatening situation.

As tensions reach boiling point, the protestors lay bare their claim for compassion and a basic right to shelter in a final stand-off.

Estevez has received plaudits for his lead role and his empathetic depiction of the plight of homeless people, especially in the face of bitter Northern American winters.

The plot is kept simple, fluid and raw, with few twists or overt plot devices and good use of dry humour.

The script is kept bare, in keeping with ragged characters holed up in the library.

Estevez cleverly avoids becoming too preachy, or trying to create a false villain in either the police – both Ramsted (who’s addict son is missing somewhere on the streets) and the Head Librarian and Director, Mr Anderson (Jeffrey Wright) discover a deeper sense of empathy over the course of the film.

It does, nevertheless, ask some nagging societal questions, like whether Trump’s America’s has lost its soul, whether city administrations commit enough resources to the problem of homelessness and whether the desperation of the homeless, many of whom suffer from addiction and other mental health issues, make them incapable of true comradery or even friendship.

It seemed a core underlying message is also that in its bid to protect the American Way, its society is losing sight of its foundations of civil liberty and the notion that “all men are created equal” – the library itself is presented as one of the last outposts of democracy which does not differentiate by class, race, religion of socio-economic circumstances.

For inspiration, Estevez cites “What They Didn’t Teach Us in Library School: The Public Library as an Asylum for the Homeless,” a 2007 essay by Chip Ward that offered an inside look at the tolerance shown to the homeless patrons who frequent the Salt Lake City Public Library in Utah.

One thing that stood out for me was the lack of a clear antagonist – Hollywood needs a villain to highlight (by contrast) the heroic nature of its protagonist.

The role is given to the DA and aspiring politician Josh Davis (strongly played by the ageless Christian Slater), but homelessness is a complex, systemic problem with a faceless enemy and it is too simply and lazy just to lay the blame on one or two local politicians or a few heavy-handed cops.

There are some good performances.

Estevez’s lead character, Stuart Goodson, develops from a nervous, nerdy and emotionally wounded Librarian to a man with deep intellect (as you might expect with all those books at hand) and a hidden reservoir of strength and defiance.

Michael K Williams has also received plaudits, although I found his character, Jackson, difficult to connect with, largely as a result of some confusing jumps between eccentric protest leader to vague bystander.

For me, the smaller roles of Big George “Laser Eyes” (Che Rhymefest Smith), Jena Malone and Gabrielle Union are the standouts and give the movie its richness –Malone’s put-down of Union’s character (Jessica Parks) is perhaps the highlight of the film.

Baldwin is well, as Baldwin always is, large and imposing and very impressive in the way he shows the vulnerability of a long-suffering father creeping over his hard-arsed police persona.

A solid film, well-directed, well-performed and well worth watching.