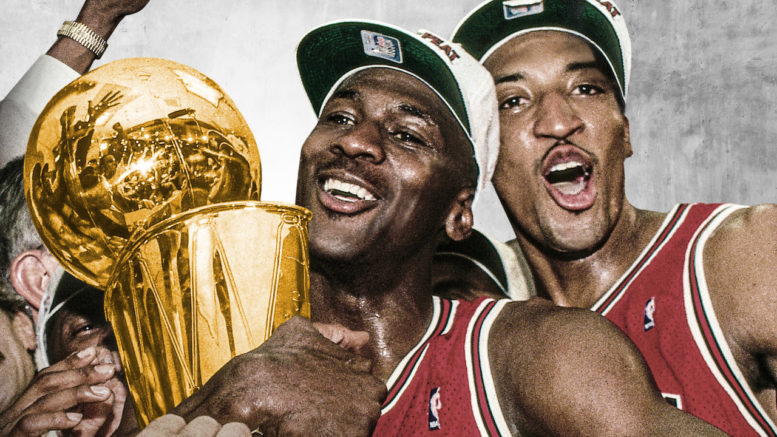 The Last Dance draws upon never before seen footage of the Chicago Bulls from the 1997-98 NBA season to bring us a revealing story of arguably one of the greatest athletes ever born – Michael Jordan.

Six of the 10 episodes have now been released (Netflix is releasing them two-at-a-time) and each one leaves you more in awe of the super-human talent of MJ than the one before – slam dunk upon slam dunk, three pointers seemingly landed from the car park, one wow moment after another.

The series toggle between the 1997-98 season to footage from earlier championships and recent interviews with Jordan and former team-mates.

Jordan’s star was on the rise from a young age when he signed a lucrative deal with Nike back in 1984 while still a rookie.

(There’s a great scene in his final game where Jordan insists on playing in his original Air Jordans only to limp out of Madison Square Gardens after the game, feet swollen and bleeding admitting “these shoes are killing me”.)

The 1991 play-offs catapulted Jordan into the spotlight after he spearheaded the Bulls to their first ever NBA title, defeating the L.A. Lakers 4-1.

His fame reached even greater heights in 1992 when the Bulls put away Western Conference winners, Portland, 4-2 to secure consecutive titles.

Then came the fabled “Dream Team” of the Barcelona Olympics – a star-studded line up of NBA legends including Jordan, Magic Johnson, Larry Bird and Bulls team-mate Scottie Pippen.

It is here we get a real insight into the ruthlessly competitive nature of Michael Jordan.

After denying rival Isiah Thomas of the Detroit Pistons a place on the Dream Team, Johnson then turned his fierceness to manager Jerry Krause.

Krause had previously shunned Jordan and Pippen in favour of Croatian star, Toni Kukoc who Krause had claimed was “the future of the Bulls.”

Accordingly, Jordan and Pippen turned up the heat on an unsuspecting Kukoc, reducing him to rubble in the US v Croatia Olympics final.

Jordan then did a similar number on another ‘darling’ of Krause, Dan Majerle during the subsequent 1993 finals against Majerle’s Phoenix Suns.

No team had ever before won three titles in a row and, after dropping the first two matches in the Eastern Conference final against the Knicks, many commentators were ringing the bell on Jordan and his famous Bulls.

But Jordan had other ideas.

He led a fierce revival by the Bulls to stampede the Knicks in the next four matches, scoring 55 points in one game, to set up a title clash against Dan Majerle’s Phoenix Suns.

As Jordan admits, “I knew that Jerry Krause loved Dan Majerle. And just because Krause liked him was enough for me. You think he’s a great defensive player? OK, I’m gonna show you that he’s not.”

And so it was – Jordan monstered Phoenix in the first two play-offs and the Suns never recovered.

Episodes five and six span two years where the Bulls surrendered ground to the Knicks and Orlando, in which the focus shifts to Jordan’s off-court dramas.

We learn that he was not loved by all his teammates.

There were allegations of a punch-up with team-mate Will Purdue at training and Australian Luc Longley, another of Jordan’s former Bulls team mates, wrote in Running with the Bulls that: “I found him difficult to be around and he and I obviously didn’t see eye-to-eye.”

We also learn that Jordan had a taste for high-stakes gambling and that, on one occasion during the 1993 play-offs, had been out at a casino all night before a game.

Jordan assures the interviewer he was not an addict – that he was always in control and that the losses had never become a “problem”.

In one scene however, he is shown to have lied to a magistrate about his gambling losses to “save himself embarrassment and pain”.

At some point however, it becomes apparent his gambling is less about escaping the pressures of fame and more about a deep desire to simply, well … win.

The series highlights just how much global adoration Michael Jordan carried around on his broad shoulders – everyone wanted to “be like Mike”.

Even now at 50’s we can still see the flame in Jordan’s eye that tells us winning is all that mattered to him.

The series also touches on the infamous episode in the early 1990s when Jordan declined to support would be Democrat African-American Senator, Harvey Grant, flippantly saying in an interview that “Republicans buy sneakers too”.

Jordan says he simply wasn’t interested in using his fame to support social justice causes – he was just obsessed with playing basketball and with winning.

The Bulls went on to win a second three-straight NBA titles from 1995-96 to 1997-98 – we have that to look forward to in the final four episodes of The Last Dance.

But we already know that when the all crush him, Michael Jordan leapt to even greater heights to become the best the world has ever seen.