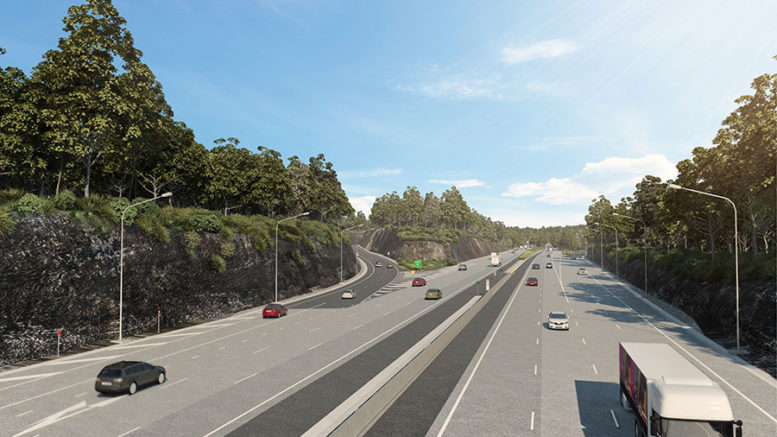 A computer generated image of how the finished upgrade will look

Central Coast motorists breathed a sigh of relief when the speed limit on upgraded and widened northbound lanes on the M1 between Kariong and Somersby returned to 110km/h on May 4.

The 80km/h limit, which was imposed while works were underway, has slowed the flow of traffic on the motorway for months as the M1 upgrade continues.

Some southbound sections are still being built with narrowed lanes and will remain at 80km/h.

Member for Robertson, Lucy Wicks, said the opening of the northbound lanes to their maximum capacity and speed limit was “great news for the thousands of motorists who use the motorway each and every day”.

“The M1 Pacific Motorway is an important link for freight travelling between Sydney and Brisbane, which is one of the busiest transport routes in Australia,” Wicks said.

“This upgrade between Kariong and Somersby interchanges will cater for the expected increase in traffic forecast as a result of growth on the Central Coast, Hunter and North Coast areas, along with increased freight demand.”

Parliamentary Secretary for the Central Coast and Member for Terrigal, Adam Crouch, said the entire M1 upgrade was now on the home stretch.

“All Central Coast residents who drive to and from Sydney will be relieved to know that their trip is becoming smoother, safer and faster,” he said.

“The Central Coast will be home to 95,250 additional people between 2016 and 2041, which is why the State Government is delivering more infrastructure for our community.”

The $391.6M M1 Productivity Package is jointly funded by the Federal and NSW Governments, with the Federal Government providing $195.8M towards the planning and construction of the package.

All M1 upgrades are expected to be fully opened to traffic at 110km/h by mid-year, weather permitting.