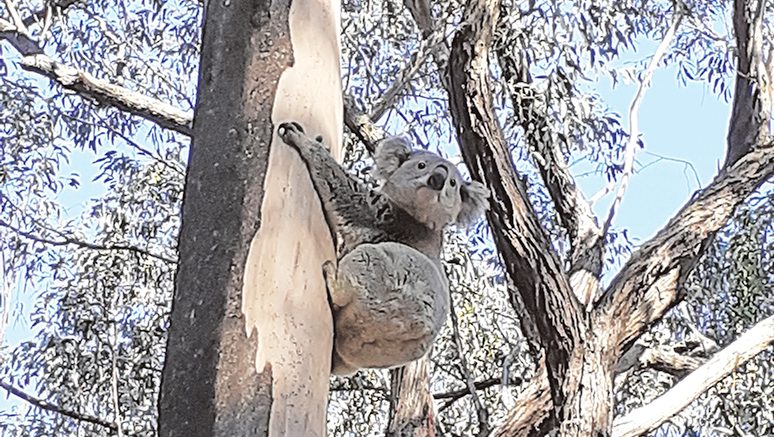 This koala was spotted in December 2019 close to the Wallarah2 mine site. Image; Jake Cassar

The race to protect what remains of the severely fragmented Central Coast koala population is well and truly on, and Palmdale’s, Joe Weston, believes that the region’s landowners could play a big part in the decades to come.

Joe has converted a slice of his acreage into a koala sanctuary and it’s his great hope that one day koalas will thrive there.

The 80-year-old said that he became inspired to act after reading about the plight of the local koala population in 2017.

“At the time, Tim Faulkner from the Reptile Park was everywhere speaking about the state of the local population and how more needed to be done to preserve the species and I just remember turning to my wife and saying that I always wanted my own koala park,” Joe said.

Three years and more than $4,000 later, Joe has transformed three acres of his property into a nursery, with more than 250 native saplings growing strong behind feral pest proof fencing.

Joe reckons it’ll be about eight years or so before the space is ready for a possible koala translocation, but he’s confident his handmade sanctuary will one day provide a home to a small group of koalas.

“I received an $875 grant from the NSW Biodiversity Conservation Trust (BCT) to put towards getting more trees, but that’s been the extent of government funding.

“Early on in the piece I approached Lucy Wicks’ office and they helped get some interest from Josh Frydenberg’s office when he was the Federal Environment Minister, but I haven’t heard from the Federal Government since,” Joe said.

The NSW BCT is within Matt Kean’s portfolio as the NSW Minister for Energy and Environment.

Joe said representatives from the BCT had visited the property on three occasions, with the third resulting in the grant funding.

Joe has not contacted his Federal Member (Emma McBride, Dobell) or Central Coast Council about his project but said he’d welcome interest and possible financial support from both parties.

If Joe’s sanctuary proves to be a success, he’d like to see other landowners follow his lead and believes a network of pocket sanctuaries could form the foundation on which the local koala population rebuilds.

Jake Cassar is a conservationist and one of the driving forces behind the recently formed Central Coast Koalas group that has been leading the charge in all things koala conservation on the Coast over the past year, including the Pearl Beach Koala Translocation project.

While the practice is untested on the Coast, Jake believes that Joe’s pocket sanctuary idea could be a viable option in the Central Coast koala recovery effort.

“I think Joe’s idea is certainly a step in the right direction.

“If other landowners came on board, there is huge scope for koala conservation.

“It’s important to note that the vast majority of known koala habitat in NSW is on private property, so Joe’s efforts will hopefully inspire others,” Jake said.

While he’s unsure about the long term feasibility of the proposal, Jake believes smaller scale sanctuaries could actually be a perfect fit for koalas with critical needs.

“There may be scope for koalas who have been injured and can’t be released back into the wild to live their lives out in a nice little sanctuary like Joe’s, rather that ending up in a zoo or small enclosure somewhere,” Jake said.

Jake added that the Coast Environmental Alliance (the flagship advocacy group behind Central Coast Koalas) would be reaching out to Joe to discuss his project and see how they could help.

“We are very keen to work with anyone who not only cares about our struggling wildlife but is willing to do something about it and I applaud Joe for his initiative.

“This is the kind of thing we need if we are going to save these little Aussie battlers from extinction.

“We need all hands on deck,” Jake said.