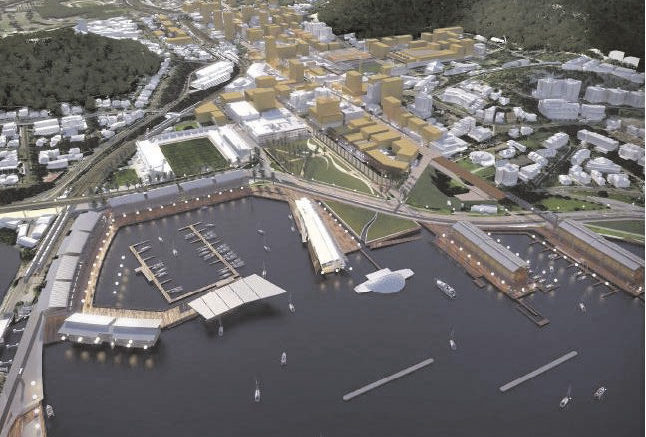 The long-debated topic of development of the Gosford waterfront is back in the spotlight, with councillors requesting a report on activation opportunities from officers at the Central Coast Council meeting on April 27.

In a watered down amendment to a motion from Councillor Bruce McLachlan, which was deferred from March 9, councillors called for a report examining previous proposals for development on the waterfront and why they were rejected, traffic management issues along Dane Dr, and flooding and land contamination issues in the area.

It’s not quite what Cr McLachlan was hoping for with his original motion, which called on councillors to embrace a “unique opportunity to provide an immediate transformation of Gosford as a vibrant waterfront City”.

“What was disappointing was that the amendment was negative, looking for all the reasons that we didn’t proceed with reactivation before,” he said.

“My concern is that when the report comes back, the debate will be negative.

“But at least it’s on the agenda.”

Cr McLachlan said he couldn’t understand why harbourside cities with comparable or more significant flooding issues than Gosford had been able to go ahead with foreshore revitalisation.

“Areas such as Barangaroo have the same sea level rise issues we do,” he said.

“All around the world, harbourfront areas are being activated.

“It seems that everyone can do it except Gosford.

“I think the attitude of some councillors is the only reason Gosford hasn’t gone ahead.

“But I won’t be pushed aside, I will bring it up again if it is knocked back this time.

“We can’t have under-utilised assets and we have to be leaders in the current economic crisis.

“The current council is a handbrake to the economy and is crippling the Coast.

“There are so may employment opportunities there, lots of joint ventures which could be undertaken.”

The issue attracted spirited debate at the meeting, which was held via video link-up, with Cr Chris Holstein labelling previous proposals for fast ferry terminals and finger wharves as “totally and utterly ridiculous”.

“But the community has always wanted the waterfront activated and it has been one of my greatest disappointments that nothing has been acceptable,” he said.

“The issue has always been who’s going to pay for it, but I still have hope that we can do something if we move forward and be realistic.”

Cr Chris Burke said the “vocal minority” has stopped any progress on the waterfront.

“It’s about time we got things going,” he said.

“We had some great opportunities years ago, but have seen big developers, like Lend Lease, drop off.

“It’s about time we got moving.”

Cr Troy Marquart said council had “done nothing” for 30years.

“Just because mistakes have been made in the past doesn’t mean we need to sit in quicksand,” he said.

At the end of the day, Cr McLachlan said he was “happy to see anything go forward” in exploring activation and employment opportunities on the waterfront.

“We can dwell on past failures or look to the future,” he said.

He said if Council also moved forward on The Entrance Channel and Lakes restoration, it would have two major regional transformation projects it could undertake post COVID-19.

“In the same vein as reclamation of The Memorial Park at The Entrance was undertaken during the Great Depression years, as an employment driver, both Gosford and The Entrance Waterfront should be seen as the catalyst to instil new found confidence into our local economy,” he said.

“Our waterfront reserves and waterways are our greatest assets and have been neglected and under-utilised for decades.”