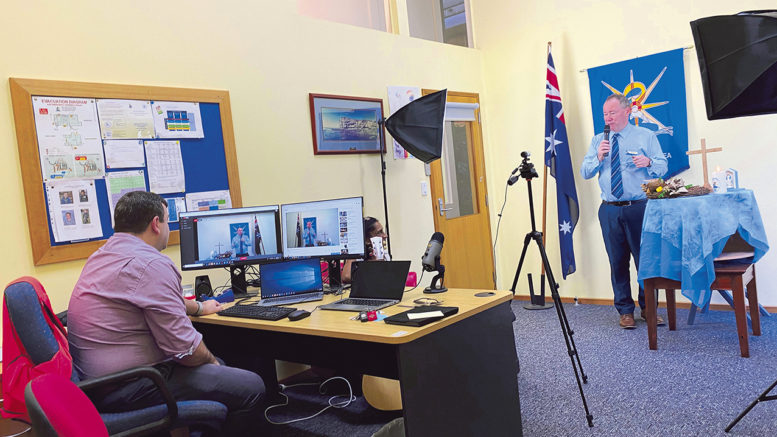 Terrigal’s Our Lady Star of the Sea Catholic Primary School (OLSS) has continued to take an innovative approach to keeping the school community connected, pulling off what could be the Coast’s first ever virtual school assembly.

Staff at OLSS took on the ambitious challenge of holding a completely digital whole of school assembly as a way to welcome students back into Term 2 on April 28.

Principal, Robert Peers, conducted the assembly and said the event was the school’s way of giving students a taste of normal school life.

“With students still at home, our parents are stressed and our students are missing their normal school lives, so we wanted to replicate something normal,” Peers said.

“We start each term with a whole school assembly, so we thought that the virtual assembly would help set the scene for the start of Term 2, as we normally would if students were here,” he added.

Like any new venture though, it didn’t come without its own challenges.

Peers said there were a few late nights researching the nuts and bolts of launching a private channel where the community could view the stream, as well as generating the URL to access it.

He also didn’t count on some eager viewers tuning in early.

“We had the stream up and running for about an hour before the assembly was supposed to start, and during that time, I was running around moving things and getting ready.

“A few early birds got to watch me and were quite amused,” Peers said.

The assembly itself went off without a hitch, with over 300 viewers tuning in.

Peers said it was a fantastic result, with the view count indicating that families were tuning in together.

“We have 560 students and a lot of siblings, so after crunching the numbers, we concluded that a lot of family members must have been watching along too.

“That was a great realisation, as the whole point was to make our school community feel connected while we’re apart,” Peers said.

Feedback about the assembly has been overwhelmingly positive, with Peers indicating that virtual assemblies will be on the agenda for the foreseeable future.

“The feedback we’ve been given has proven that there’s a real desire for community engagement, so we’re planning on running virtual assemblies every Monday,” Peers said.

With the resumption of Term 2, Peers said OLSS staff were now turning their attention to their next big challenge, the government’s staggered return to school.

“I am working with our parent advisory council and staff to get our school ready for students’ return.

“As a larger primary school, this is undoubtedly going to be tricky, but it’s a mandate, so we’ll just have to make it work,” Peers said.