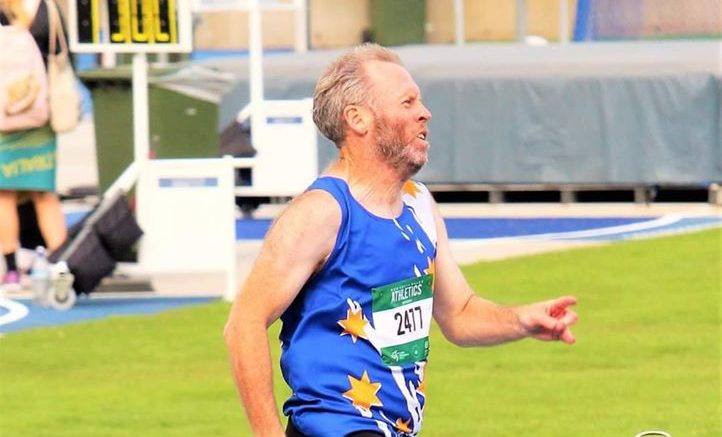 A lover of the sprint, Ernie joined the Gosford Club at the start of the 2019/20 season after a long stint at Mingara Athletics Club.

His newly earned title came off the back of an uncertain season thanks to injury and the coronavirus.

“I was getting over an Achilles injury before the summer, which is when most of the Masters Competitions are held, but I ended up doing quite well,” Ernie said.

Those results included a stellar performance at the State Championships where Ernie defeated former national hurdles medallist, Matt Woodhouse, in a series of events.

Ernie had hoped to continue that fine form through to the season’s end, but when the coronavirus reached pandemic status it was halted and then ultimately abandoned.

With a month’s worth of competition results effectively lost, this meant scoring for this year’s Athletics NSW Awards would be even tighter, but for Ernie who’d been riding high throughout the season up until that point, it helped edge him ahead of the pack.

The pandemic meant there was no formal award ceremony either, so when Ernie was named Masters Athlete of the Year, he was taken by surprise.

“It was a huge shock, I knew I’d had a good season, but I didn’t even know I was in the running,” Ernie said.

And Ernie was not the only local athlete to bag an award this year, with Mingara Athletics Club named Country Club of the Year and its Secretary, Margaret Beardslee, named Club Administrator of the Year.

Ernie said it was good to see the Central Coast being recognised as a base for athletics talent.

“Having been a member at Mingara I know how good they are and how much they’ve done to grow athletics on the Coast.

“There’s so much talent here, especially at Gosford.

“We’ve got some really exciting juniors who’ll definitely be ones to watch,” Ernie said.

As NSW limps towards an easing of restrictions it’s still yet unclear how athletics might restart given the nature of their competitions requiring large groups to gather, but for Ernie the focus is now on the Masters World Titles.

“The titles were cancelled but now they’re being held next July.

“I competed at the last titles in Spain and I’d like to again when they head to Finland,” he said.

Until then, he’ll just be getting on with his training, which he hopes will include a return to the Gosford Club and competitions come summer.