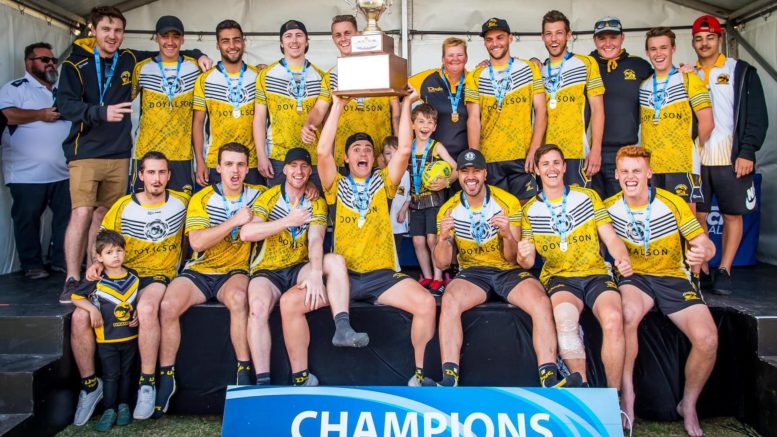 With the Doyalson Lifestyle Group (DLG) officially clearing the first hurdle towards its major housing and recreation development, the four sporting clubs that call The Doylo’s sporting fields home have been given their marching orders.

In last edition of Wyong Regional Chronicle, it was reported that the 45ha redevelopment, which takes in the RSL Club and its playing fields, achieved its desired rezoning and was now before the NSW Planning Minister.

While they have been given a three to five year grace period, all four clubs are now facing the prospect of finding a new home ground, a task easier said than done.

The Chronicle spoke to each club about what their future holds.

Dragons’ President, Sharyn Glachan, said her Association would not wait to be told to leave and were already exploring their options.

While she’s adamant that the Dragons, the former Wyong Shire’s only touch footy association, would be staying on the northern end of the Coast, she admits that the Dragons’ committee had their work cut out for them.

“We have approximately 1,000 members, and the fact is that there just aren’t any grounds big enough for us.

“The only one that even comes close to being suitable is the Wyong Leagues Club fields, and we did approach them about the possibility of sharing, but our interests didn’t align, and we could not come to an agreement,” she said.

“We’re seriously concerned that we’ll have to put caps on our team numbers and competitions because we just don’t know what things will look like in three years’ time,” she said.

The Wolves are in a similar situation, but their President, Kerry Sweetnam, is hopeful that the combined support of the DLG and Central Coast Football (CCF) will see them through the eventual transition.

“We have been told by the DLG and by CCF that we’ll have their support in finding a new home ground.

“I want our members to know that we have started looking for new grounds and that the Wolves have no intention of leaving the northern end of the Coast.

“We would also be happy to share grounds with another club,” Kerry said.

The Warriors are easily the club best off following the announcement, as Doyalson is not their home ground.

Lake Munmorah’s Gumbuyah Oval holds that honour, with only their seniors playing at Doyalson as part of a sponsorship deal with DLG.

Seniors Club Secretary, Greg Banks, said the Warriors were waiting for the resumption of the regular sports council meetings between the clubs and DLG, which have not taken place since February due to the coronavirus, before they made any decisions.

“This will not have a huge effect on the Warriors as we have our own home ground and the DLG know that.

“This is a huge project that will take years to complete and I’m sure the DLG will continue to support the clubs involved in the meantime,” Banks said.

It’s a different story for the Doyalson-Wyee Cricket Club however, who could abandon the Central Coast entirely once their grace period is up.

Due to a previous failed amalgamation between the former Doyalson Cricket Club and what is now Toukley’s Northern Power Cricket Club, the Doyalson-Wyee Cricket Club are ineligible to compete in the Central Coast Cricket Association’s competition and are instead a part of the Newcastle Cricket competition.

Club Secretary, Mike Mariner, said a move from Doyalson would likely see them relocate north, but no big decisions were to be made until they had more information.

DLG CEO, Darren Thornton, said the DLG was fully committed to supporting the clubs through their relocation and had offered to enter into a Planning Agreement with Central Coast Council to ensure the development does not commence until suitable alternate grounds have been found.

“An enormous amount of research, resources and money has been invested to develop a strategic masterplan to ensure the viability and longevity of The Doylo as an essential community hub and regional destination for our communities to enjoy for many years to come, whilst redirecting a reliance on gaming revenue for future prosperity.

“The sporting organisations that call The Doylo home have been well informed of our plans and have been assured that they will be suitably relocated and supported when the time arises,” Thornton said.

With DGL to honour the Planning Agreement Thornton said the clubs would be looked after but could not offer an outline of how said support might take shape due to the current situation with coronavirus.

“We have been working with the clubs to understand their needs through a monthly sports council meeting and in between as necessary.

“When this relocation will happen and what level of ongoing support will be available to these groups is still unknown due to the impact of these current unprecedented times.