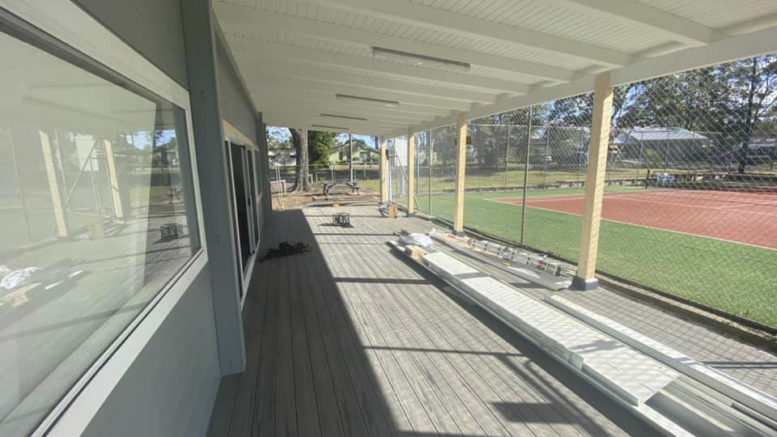 Centre Manager, Brett Bevan, confirmed that staff were preparing to move into their new space from May 8, with the new clubhouse a major departure from its previous incarnation.

According to Bevan, the previous clubhouse wasn’t much bigger than the average household bedroom, with the vast new facility equipped with enough space to comfortably house an office, pro shop, canteen and a set of men’s and women’s toilets and disability toilets.

It’s an exciting conclusion in what has been a difficult and complex chapter in the centre’s history.

“It all started in the lead up to the 2016 Federal elections, when then Member for Dobell, Karen McNamara, visited the centre for a court opening.

“She spoke with members about the state of the clubhouse and came to the Board with an offer of $50,000 to commit to a redevelopment.

“It was an unexpected offer, but $50,000 was nowhere near enough to satisfactorily build a new clubhouse, so the offer was declined.

“A few weeks passed, and Karen came back with the $200,000 offer that kicked off the project,” Bevan explained.

Having been run exclusively by its member elected Board since 2015, the Board and members at the time then came together to consult on what they’d like out of a new clubhouse, and that feedback was used to draft the initial concept plans that would inform the Development Application.

After some back and forth with the then Wyong Shire Council, the project hit its first major snag following the 2016 amalgamation and subsequent administration period of the newly formed Central Coast Council.

This was followed by a period of growing pains as council continued to reconfigure the way it dealt with the centre, shuffling it between different portfolios as issues around the centre’s lease, facility maintenance and general security arose, further pushing the project onto the backburner.

In 2019, the project was thrust back into the limelight when finalised plans were unveiled along with the announcement that the project had acquired an additional $94,000 funding from the centre, as well as $75,000 from Central Coast Council, bringing the total cost of the build up to $369,000, including demolition of the existing clubhouse.

More spanners were thrown into the works when cracks in centre management’s and council’s working relationship began to show, with Bevan denouncing council as a negligent landlord after mounting issues around disability access and security came to a head.

That narrative escalated further, following a public spat over the project’s construction certificate, when council sent the bill for it to the centre.

As the owners of the building, council’s decision to dodge the bill was met with scorn by the Centre, with Bevan going as far as to label it a “blatant cash grab by a council that was seriously out of touch with its community.”

Despite all that, construction got underway in February of this year, and with move in day finally here, Bevan is focusing on the positive.

“The hurdles along the way meant that this has taken longer than it should have, but it’s finally done and we couldn’t be happier.

“Our membership has only grown since we first secured the funding, and we can’t wait to hold an official grand opening once everything with COVID-19 settles down,” Bevan said.