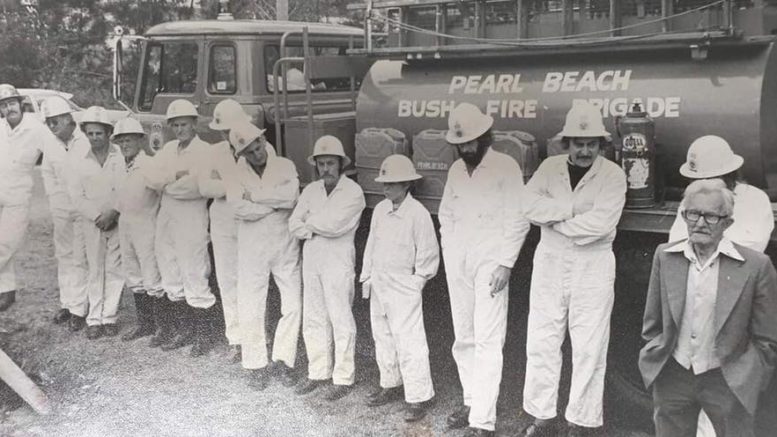 Bushfires were a major concern for the early settlers in Pearl Beach.

The formation of a brigade to fight bushfires came very early and for many years was a significant reason for the continuing existence of the Progress Association which formed in 1929.

In the early days the only water available for firefighting was the water in the creeks, springs and wells and in private water tanks.

Mostly, firefighters cleared fire breaks using shovels, axes, hoes, mattocks and tried to beat out encroaching flames with green boughs cut from the trees, or beaters made of canvas or hessian attached to pieces of wood and fitted with handles.

These beaters were soaked in water where possible to make them more effective and later they were supplemented by knapsack sprays.

The collection of firefighting equipment was stored in a shed on Ms Minard Crommelin’s property.

Minard was an early settler and a staunch environmentalist who made her shed available to store equipment, because mostly fires came out of the bush probably as the result of a lightning strike, and her shed was close to where it was most likely to be needed.

Ironically, because there was no electricity in Pearl Beach in those days, fire was used all the time for cooking, heating and lighting, but there was also a proper understanding of the dangers and ways of fire and it was treated with respect.

The fire brigade was composed entirely of local volunteers who lived in the valley or were visiting for the summer holidays.

At the first sign of a fire, an alarm was sounded summoning them to gather to fight it.

There were not many vehicles available to transport them though some fire fighters possibly came on bicycles, others on foot.

Eventually, in 1948, there was a disagreement between Miss Crommelin and the fire brigade.

She wanted fires in the bush fought because she said frequent fires were changing the plant ecology, strengthening plants that thrived on fire and destroying those that were more fragile.

The fire brigade preferred to focus on fires that threatened property and to let fires in the bush burn themselves out.

An underlying problem seems to have been about whether the fire brigade was an autonomous body, or whether it came under the authority of the Progress Association, or the local Council.

There may also have been a clash of personalities as Minard was a strong woman and she was living in a vulnerable place.

Eventually a public meeting was convened and on the advice of the Bush Fire Advisory Council, it was decided to leave firefighting in the hands of the locals including the Progress Association.

When the shed was no longer available for storing equipment, a shed was built at the Memorial Hall where the equipment was stored. For many years the relationship between the Progress Association and the Bush Fire Brigade was, and still remains, strong.

Then the fire brigade acquired a vehicle and it was necessary to build a shed in which to keep it as well as all the equipment.

So, a proper fire station was located on the bank of Green Point Creek adjacent the Diamond Rd bridge.

As well as the tanker and hoses, town water had been laid on so fire fighters were able to access the mains.

That old fire station was often flooded by the creek and in the late 1980s was washed away – along with its decorative beer can collection.

It was then decided to rebuild on the current site.

Because of the primitive state of the roads in those early days, and limited communications systems, most of the volunteers lived locally and most fought fires that occurred locally.

As late as 1970s, there was a siren at the old store that was used to warn of a fire in the vicinity and to summon the fighters to the fire station.

Soon after the siren sounded, cars could be seen and heard dashing along Diamond Rd and even men running towards the station as they pulled on their firefighting overalls.

It is only fairly recently that the volunteers have been supplemented by a core of professional firefighters and that the Pearl Beach Brigade has become part of the large network established by the Rural Fire Service.

… and the fires continue

In a devastating fire in December 1990, houses and property were lost, and in more recent times, fire once again threatened the unique and fragile environment.

In 1994, Pearl Beach was isolated when the F3 was closed, and in November 2001 two helicopters and 17 tankers were called to contain a fire out at the waterfall.

On New Year’s Day 2006, many residents living at the northern end were ushered down to the beach joining a large holiday crowd watching helicopters with their flimsy buckets of water delivering water to the fire.

Thankfully the wind turned and the residents were safe.

Again, the helicopters and their buckets were filled off shore at Pearl Beach, then swooping low over homes to reach the fires and drop much-needed water, greatly assisting our Rural Fire Service brigade on the ground.

Pearl Beach Rural Fire Brigade holds a special place in the life of the community.

A new vehicle in 2014, and more recently a trailer, were presented to the brigade.

In January this year, two barbecues were held which along with raffles sales, cash donations and the sausage sizzle sales, raised $15,000.

The brigade’s current wish list includes two-way radios for the local community volunteers, night lights at the Pearl Beach station, fit out for the station extension, and another Community Fire Unit trailer including equipment.

History, News, Out & About