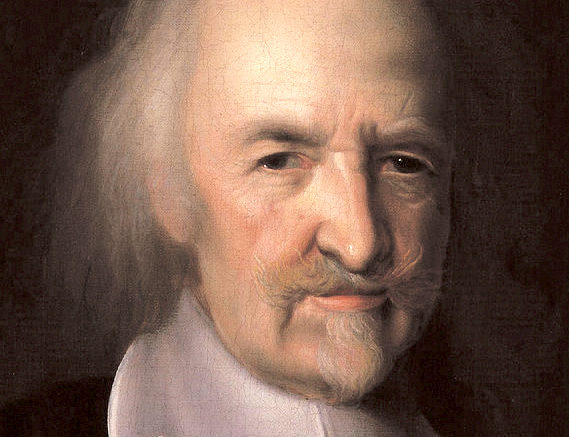 Thomas Hobbes was the subject of the Woy Woy Philosophers Society meeting.

Well, it was no easy task getting the Society together this week, what with the ban on social gatherings and all. As a self-employed priest, Johnno was allowed out on compassionate grounds (to bless people), while Boof had been called out to fix a fridge at the Wyong Hospital.

With no other excuse to be out, Robbo resorted to dressing up as a dog.

“I don’t normally find you cute Robbo, but right now I just really want to pat you,” I said.

“Touch me and bite your arm off.”

He seemed agitated. We had decided to meet in the perfume department of Myer – it was hard enough for us to stay alive with all that peach- and rose-scented fragrance in the air, let alone a virus trying to get through.

It was some of our best thinking ever.

“Haven’t you just spent the last week couped up together 24/7?”

“Yeah … naaagh, I told her I had the virus and had to go into ICU. I’ve been hiding in the broom cupboard ever since with my esky, some beef jerky, my ipad and headphones.”

“Why the broom cupboard?”

“No one ever goes in there. She found me in there this morning … said she could hear me chewing.”

“I don’t reckon it is Johnno,” said Robbo. “I reckon the government has orchestrated all of this … it’s all part of their grand plan to create a totalitarian police state.”

“And they just happened to execute this grand plan at exactly the same time as over a hundred other countries?” mused Johnno.

“Yeah, that’s right, it’s a global conspiracy. They even agreed to take all the toilet paper away to frighten everybody into submission.”

“I’ve got it lads … a new social order to set up once the shutdown is over …a new social contract.”

It was then we saw the copy of Thomas Hobbes’ Leviathan in his hand.

A great lover of Hobbes was our Thommo, who would often suddenly cry out in the middle of a rugby match: “In battle, force and fraud are cardinal virtues.”

“What are you talking about Thommo?” we asked.

“Hobbes has the answer,” he continued. “While all humans have rights and freedom, for their own protection, we need to be subjugated to an absolute sovereign.”

“Do you mean the State can take away the rights or the property of its subjects without their consent?”

“Yes … in times of war especially … as long as they are a legitimate government, based on the objective science of morality.”

“Bugger me,” yelled Robbo. “They’ve already got to Thommo – quick lads, an intervention.”

But Thommo held up his hand.

“Bellum omnium contra omnes,” said he, quite reverently. “Image a world without such a supreme sovereign, a world where each person has a right, or license, to everything in the world – it would be overcome with violence, and end in a war of all against all. There could be no industry, no civility in such a world.”

“So, how much of our individual rights and property should we give up for the protection of society in your new world order Thommo?” I asked.

“Well, I reckon it has to be in proportional to the value of each society – so maybe half for Woy Woy and, say five per cent for Terrigal.”

We all nodded – that seemed about right.

“And how do we get ourselves a legitimate government? And what objective science is there on morality?’

“Well I thought I might run it,” offered Thommo.

“Naagh … yeah. I think that’s what they did with the Kremlin Thommo – that was a supreme sovereign weren’t it, and it was so simple they even let the secretary run the whole joint.” said Robbo.

“Exactly,” said Thommo. “What could possibly go wrong. I’ll need an army, I suppose, if I’m going to protect all those people … a red one if possible.”

“But Hobbes intended that all decisions made by the sovereign would reflect the collective voice of the people,” I cautioned. “He that complaineth of injury from his sovereign complaineth that whereof he himself is the author, and therefore ought not to accuse any man but himself, no nor himself of injury because to do injury to one’s self is impossible”.

“I cut my toe off with the lawn mower once?” said Robbo.

“It’d all be for the people, at least all the one’s that agree with how I run things,” said Thommo. “And I’d hand all the power back when it was appropriate.”

We paused for a while in silence to reflect on this grand new social contract laid out before us.

It occurred to me that it may have been tried somewhere once before, but before I could say anything, I noticed Boof was unconscious beside me on the floor.

“No, I don’t think so Joffa, he’s just too close to the Chanel showcase and has passed out on the fumes.”

Eventually we called the foxy over to lick his face until he came around.

“Where am I lads?” asked the great man, who always liked to chime in late to a discussion.

We explained that were just putting the finishing touches on the new post-virus world order, when he’d succumbed to Chanel.

“Oh, I dunno, she was too busy licking my face.”