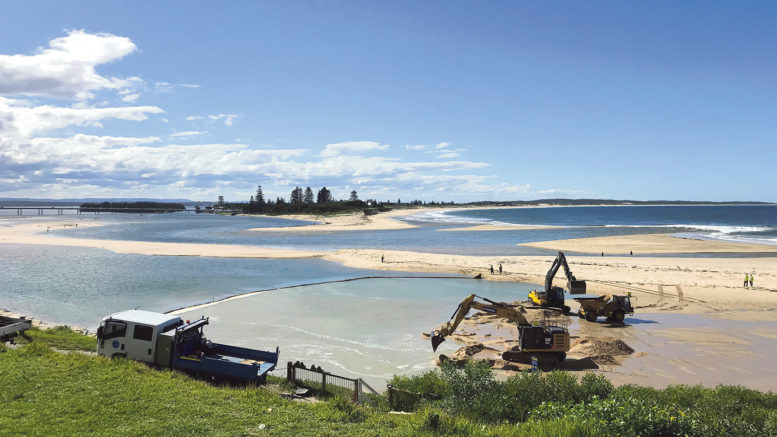 NSW Roads and Maritime Services are working on a barge under The Entrance bridge until the end of May, to replace power cables.

Meanwhile, Central Coast Council is working on the next phases of the 2020 dredging program following initial works completed earlier in April under the advice and guidance of expert coastal engineers engaged by council.

About 5,000 cubic metres of sand have been removed from the eastern reaches of the channel and used to repair eroded banks on the southern side of the channel.

The works were also designed to discourage further outflow from the channel along the southern side and sustain the current flow of water through the northern channel for a longer period of time.

Central Coast Mayor, Lisa Matthews, said that during the February flood event, a lot of erosion occurred on the southern banks of the channel.

“Repair of this foreshore will improve the safety of the beach area and protect nearby infrastructure such as council’s lifeguard tower,” she said.

Council’s Unit Manager, Environmental Management, Luke Sulkowski, said the work would help preserve the current exchange of water between the estuary and the ocean.

“Since the February 2020 flood event, Council staff have observed significant changes in the movement of sand at The Entrance, with the sandspit that separates the ocean from the estuary again beginning to grow in size,” he said.

“The Entrance Channel is a dynamic coastal environment and while the widening and narrowing of the channel is a natural process, these works are in part designed to try and sustain the current flow of water through the northern channel for a longer period of time.”

Meetings with industry experts and multiple state government agencies have taken place to gain specialist advice on the dredging program, including advice from the NSW Environment Protection Authority about meeting the regulatory requirements.

Investigations are underway into other activities that may be implemented under the dredging program to manage The Entrance Channel area in the shorter term, and tender documents are being drafted for a comprehensive dredging program.

Meanwhile, The Entrance MP, David Mehan, has launched a petition calling for a change in the management of The Entrance Channel to avoid a repeat of the February 2020 floods.

The petition calls on the State Government to work with Central Coast Council to actively manage the channel to reduce flood risks and maintain the health of the lake.

Mehan is also calling for better flood warning and triggers to open the channel in an emergency, such as the February flood event.

“I want the State Government to commit to long-term funding of the channel,” he said.

“The management of the channel needs to change and I hope that with the submission of the petition from community members, it will demonstrate the importance of this issue to both Central Coast Council and the NSW Liberal Government.”

The petition calls on the government to make improved flood mitigation around Tuggerah Lakes a priority and to conduct a review of the Tuggerah Lakes Floodplain Risk Management Study and Plan and then ensure all elements of the plan are implemented.

It says part of the policy should be the use of earthwork machinery to maintain a channel opening to the ocean and ensure that council adopts trigger criteria based on flood warnings and predicted river heights which will initiate action to ensure the channel is always sufficiently open to minimise flood risk.

The petition also calls for adequate flood warning procedures to be in place.