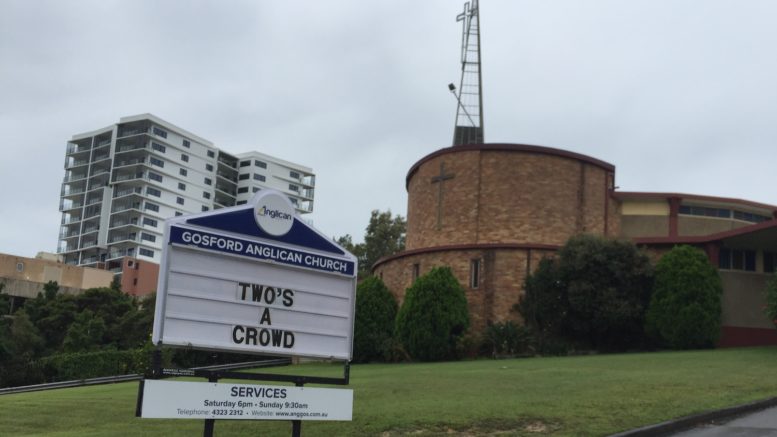 Two's a crowd sign in front of Gosford Anglican Church.

The National Cabinet has moved to adopt stricter social distancing guidelines, taking the limit on gatherings down from 10 people to just two.

Prime Minister, Scott Morrison, announced the drastic new measures during his March 29 press conference, telling the nation that the Cabinet was taking action to slow the spread of COVID-19 and save lives and livelihoods.

“We will be living with this virus for at least six months, so social distancing measures to slow this virus down must be sustainable for at least that long to protect Australian lives and help Australia to keep functioning,” the Prime Minister said.
“Our public health measures are taking effect, with over 211,000 tests undertaken and 3,966 confirmed cases in Australia (as of March 29).
“The rate of increase in the virus curve is slowing, but overall numbers are still increasing,” he added.
Exceptions to the two person gathering limit include: people living in the same household going out together; funerals – maximum of 10 people with strict social distancing to be adhered to; weddings – maximum of five people with strict social distancing to be adhered to; and family units.
Following his announcement, the Prime Minister noted that the new two person limit was not legally binding and that it was up to the individual states and territories to adopt measures to make it enforceable.
The NSW Government has since moved to empower the NSW Police Force to make the measure enforceable with on the spot fines of up to $11,000, or even jail time, applying for those who don’t comply or to those who leave the home for a non-essential reason.
NSW Health Minister, Brad Hazzard, confirmed that the following examples were deemed suitable reasons for leaving the home: obtaining food, medicine, other goods or services; Travelling for work or education if the person cannot do it at home; travelling to seek medical care or for caring reasons; and for exercise.