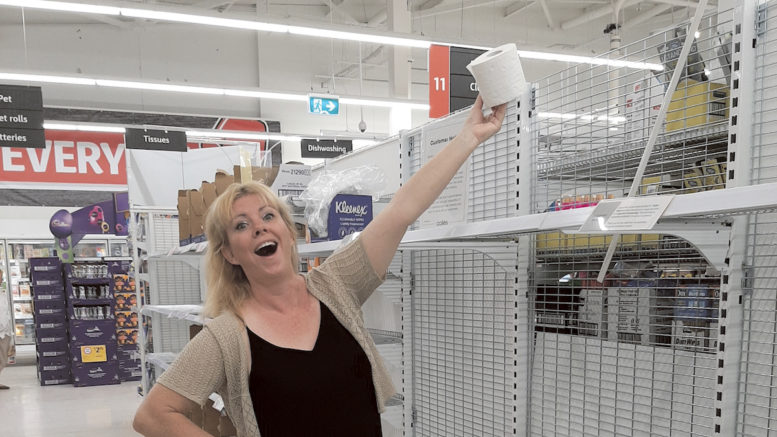 The title of “toilet roll singer” isn’t one which Sally Loughnan of Lisarow would have coveted a few short weeks ago.

But the mother of three has become an online sensation thanks to regular Facebook posts of her roaming the aisles of Coles at Lisarow looking for toilet paper as she sings quirky self-composed songs to popular melodies.

“I posted the first one early in March,” Loughnan said.

“I couldn’t believe that there was no toilet paper on those shelves and I wrote a little ditty to the tune of Desperado.

“People looked to be in such despair that I thought I’d try to make them laugh a little on Facebook.”

Following that first post, Loughnan was inundated with requests for more of the same.

“I just kept doing it because people said they wanted more songs and that it made their day,” she said.

“I’ve always played around with changing the words to popular songs, so I just kept adapting lyrics.”

Calling on her background as a professional singer and active member of Gosford Musical Society, Loughnan has posted around 10 adaptations of popular and musical comedy songs, all filmed live in the aisles of Coles Lisarow.

Songs she has parodied include Who Will Buy from the musical Oliver, Let It Go from Frozen, My Favourite Things from The Sound of Music, and popular tunes such as Let Me Be There and Am I Ever Gonna See Your Face Again.

“Probably my favourite, and certainly the most popular, has been, Give Me a Home Among the Gumtrees,” she said.

“That song had over 120,000 views, I couldn’t believe it – I even heard that it had been viewed in Budapest and in Canada.

Loughnan has become something of a viral sensation, with thousands of shares and likes on her posts.

“The staff at Coles Lisarow have come to know me really well.

“The security lady even joined in a bit as I recorded a song the other night.”