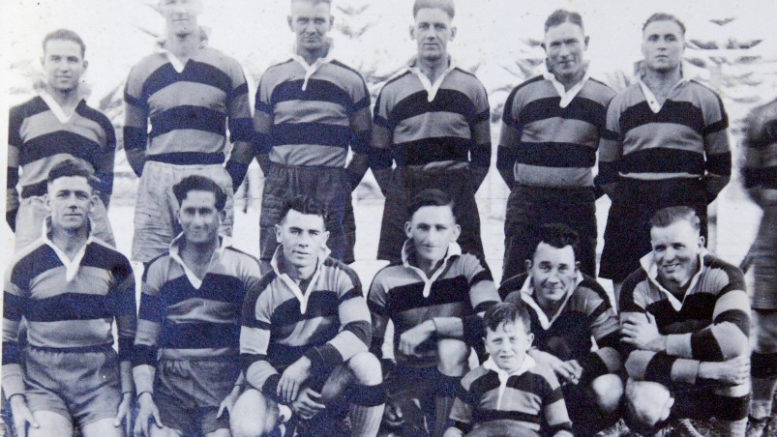 Extract from: Here Come The Townies, by Andrew Stark

There was an heroic Australian private who volunteered as a human target.
He walked down the centre of the road alone, while his comrades, with tommy guns, crept alongside amongst the rubber trees.
There were a lot of dead Japanese snipers that day.
The private was wounded but fought his way on to Parit Sulong.

The Gosford Rugby League Football Club’s contribution to the war effort was immense.

The number of enlisted men who had previously pulled on the town’s cerise and blue jersey was disproportionately high when lined up against that of the general populace.

From the 1940 teams alone, over a dozen Gosford players served their nation.

This list included team stalwart, Jack Stuart, who enlisted two months after the tragic death of his wife, Eileen.

Stuart had been a regular member of the Gosford forward pack since transferring to the town in his job with the Railways Department, moving from Brooklyn on the Hawkesbury River early in 1934.

A year or so beyond settling in Gosford, Stuart purchased a greyhound named “Jike”, which he ran at the local tin hare race meets.

The dog gained some notoriety for its obvious intelligence and the rangy Gosford forward would share the crafty pooch’s short and sharp moniker.

Lyanne Weston, Jack Stuart’s daughter said: “My father had a greyhound which shared this name.

“I am not sure which came first, the nickname or the dog.

“The story goes that the dog was forced into retirement when he jumped the fences midstream in a race to lie in wait on the other side of the track for the rabbit to appear.”

By 1941, Jike Stuart was a Staff Sergeant serving with the 8th Division’s Provost Company in Malaya.

His son Ian recalls a story that his father relayed about the days leading to the fall of Singapore, when as the Staff Sergeant, Jike Stuart was required to search the ships in an attempt to return the Officers who were attempting to run away.

The ill fated 8th Division was effectively cut to pieces in attempting to defend positions in Malaya and Singapore during early 1942, and two thirds of all deaths sustained by the Australian Army in the Pacific was said to have been suffered by this Division alone.

Two and a half thousand men were killed in action, with many more rounded up and subjected to horrific conditions in Japanese labour camps.

One in three of these men would die in captivity.

He was imprisoned in Malaya’s notorious Changi prisoner of war camp and endured malnutrition, Dengue Fever and Malaria.

To add further misery, while working in the camp, his right foot was run over and damaged terribly by a railway truck loaded with sand.

The initial diagnosis was that the foot needed to be amputated but Jike refused and told them to fix it!

“I know he was one of the custodians of the “broom head with a radio buried inside”; this was hidden from the prison guards and was a lifeline for the men to the outside world”, Lyanne Weston said.

Stuart’s foot injury and the physical battering and nutritional neglect that his body endured while being held captive, put paid to any aspirations he may have held of a rugby league comeback after the war.

He did however, recommence playing both cricket and tennis.

Jack Stuart stood over six feet tall and during his footballing days was renowned for his considerable upper body strength.

He had always loved his sport and was an avid St George supporter.

Jike enjoyed nothing better than watching the Sydney matches on TV with the volume turned down and the radio commentary turned up, and woe-betide anyone who interrupted.

His daughter Lyanne recalls as a child visiting her father in the Concord Repatriation Hospital after the war and suggests that he may well have turned out for the Dragons during the famous Kogarah club’s formative years.

“There was another in-patient who had worked as a gatekeeper for the St George club who remembered our father, so I only knew that he had played First Grade for St George as a young man”, Lyanne said.

There is no record of Jack Stuart having ever played grade football with St George, although he may well have represented the Club at a junior representative level during the early 1930s.

His father was the local baker at Bexley during the Depression years and the family lived deep in the heart of Dragons territory at Earlwood.

All of Jack’s early football would therefore have been played within the confines of the St George junior league.

Jack Stuart presents as an immensely robust character with an indomitable ability to carry on through considerable adversity.

It was a testament to the man’s inner grit that he was back playing in the Gosford forward pack just weeks after the death of his first wife, Eileen.

He would later marry Elva Gertrude Hurst, and the couple produced two children, Ian and Lyanne.

The family ran a farm on Mangrove Mountain before moving to Green Point.

Stuart survived the horrors of the Changi prisoner of war camp and returned home without ever complaining about a thing.

“One story I remember from my time on the farm was that Dad was bitten by a Red Bellied Black Snake.

“He went in to Gosford to see Dr Duncan and the doctor said, ‘I will have to put you into hospital for the night’.

“Dad stood up and said, ‘Sorry, I’ve got to get home to feed the chooks’, and walked out of the doctor’s office”, Ian Stuart said.

From this list it can be confirmed that at least two dozen did serve in the armed forces during the Second World War.

Australian War Memorial figures reveal that 9.87% of the New South Wales population did enlist during the seven year campaign, however, the Gosford Rugby League Football Club circa 1940 contributed at over five times that rate.

Over fifty eight percent of Gosford players donned the khaki.

Given this extraordinary sacrifice, it’s little wonder that the Club failed to pull a team together during the proceeding five winters.