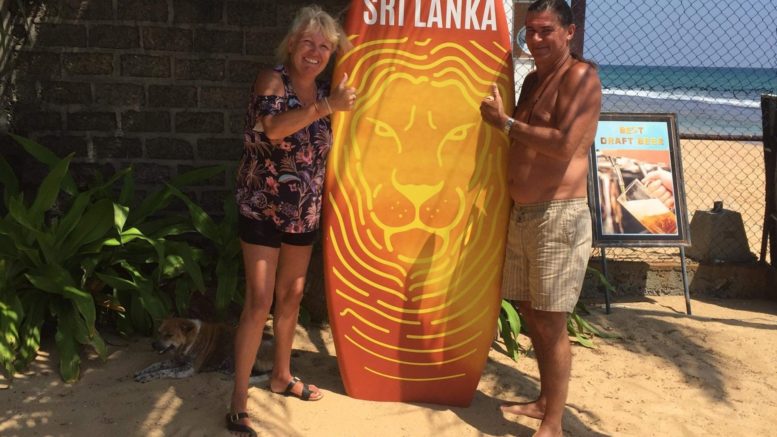 Margaret and Darren Waters in Sri Lanka in happier times

Margaret and Darren Waters of Killarney Vale are in coronavirus quarantine at the Crowne Plaza, Melbourne, and say that they feel like they’re in a four-star prison.

A phone interview with Margaret featured in our weekly newscast 5@5.

“When we got back to Australia on Monday, March 30, it was extremely overwhelming, quite scary really,” Margaret said.
“It was the police presence, the security, everyone with masks on, the physical distancing and the amount of paperwork we had to fill out.
“Then we were put on a bus to take us to the hotel with a police escort at front and behind the bus, and when we got to the hotel, there were about 20 or 30 police.
“It really wasn’t that scary leaving Sri Lanka where we were holidaying, and I was a little excited to be coming home, but when we got back to Melbourne, well, that was the scary part.
“Mentally, this two weeks is going to be very tough, because we’ve always been used to going out and doing things, but there’s no option here.
“Even people in prison can go out for an hour or so to exercise.
“There’s really not even enough room here to do sit-ups, but it is what it is, and I know I’ll be going bananas in two weeks.
“My phone is my lifeline to everything, and the only other thing to do is watch television.”
Margaret said they had a nice, but small, room, with a large window overlooking the Yarra River, but it couldn’t be opened for fresh air.
“Meals are left three times a day outside our door in a brown paper bag and we can ring reception for anything we need.
“The funny thing is, I asked for a paperclip so I could replace the SIM card in my phone and it took five and half hours for them to get it up here – and then they brought 10.
“We are pretty much left to our own devices and we haven’t been offered anything to do, like books, jigsaws, magazines or anything.”
Margaret said their homecoming is difficult.
They’ve both lost their jobs and the financial cost of their trip back from Sri Lanka had hit hard, and to top it all off, they’re not sure whether they’ll have to go into quarantine again when they fly from Melbourne to Sydney.
When they were in Sri Lanka, just before they came home, Margaret said they were surprised at how quickly things started to happen.
“The first week in Sri Lanka was fine because there were no real problems, but in the second week, they started closing everything,” Margaret said.
“One by one things we’d booked were cancelled, a safari, a whale watching trip and then there was a curfew, and we weren’t allowed to leave the property that we were staying in.
“It was like a ghost town.
“It was starting to get on our nerves by then, and even though we tried to just go with the flow, it was when two of our flights were cancelled that we decided we’d better leave, and that was what our government website was advising as well.
“The airlines were telling us that there wouldn’t be any more flights until the end of April.
“We rang the Australian Embassy for help, but the phone kept ringing out for three days straight, and then someone told us it was closed for a coronavirus public holiday – just when people needed them.
“A coronavirus public holiday? Have you heard anything like it in your life? (Ed. I think the meaning was lost in translation)
“Bearing in mind that Wi-Fi over there is really, really, really, slow, it took me half a day to just to find out what airlines could fly us back, and in the end, I rang my daughter in Melbourne, and in an hour, she managed to find us a flight.
“That flight home was twice the price of the second most expensive flight and I had to use the redraw on the mortgage to pay for it.
“I’ve been told by my insurance company that they couldn’t help because we booked everything after March 2, and they basically said we were on our own, and warned that if we were going to change flights, we wouldn’t be covered for medical either.
“I felt completely let down.
“Our flights were cancelled, the insurance company turned their back on us, we’d lost our jobs and we thought, what else could happen?