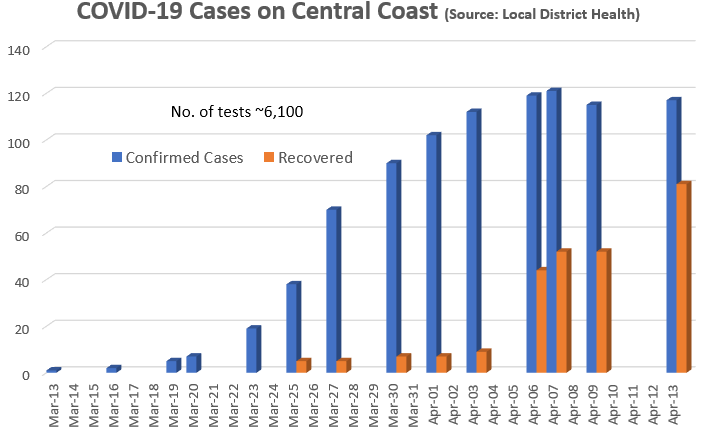 Authorities appear to have been largely successful in keeping tourists away from the Coast over the Easter long weekend, albeit a few local residents were fined for social isolation infringements.

A 34yo Bateau Bay man was fined $1,000 for breaching self-isolation rules after returning from overseas travel, while an 18-year-old man from Willoughby, who could not give a good reason for travelling to Avoca Beach, was also issued with a $1,000 fine and sent home.
The tough medicine of social distancing and business shutdowns, however, appears to be working.[Covid-19 Update Video News]As at 8pm Monday night, there were 117 confirmed COVID-19 cases on the Central Coast, an increase of just two cases over the long weekend.
That’s down from 121 as reported last week and that’s because some of the earlier reported cases that were categorised as Central Coast cases were in fact residents of other regions diagnosed here but who have since recovered and returned home.
There have now been over 6,000 people tested for the virus on the Coast, which currently has the fourth highest percentage of cases per 32.59 per 100,000 residents.

As shown on the chart, 81 of these cases have now recovered which means there’s just 36 “live” cases on the Coast with only two of those in hospital.
Local District Health have so far been very quiet about the reported outbreak of 16 cases at Gosford Hospital over recent weeks, however based on the broader data, the outbreak appears to have been contained.
Separately Central Coast data analyst, Patrick Spedding, is concerned about the lack of information available regarding COVID-19 hot spots.
“A couple of weeks ago we were just getting numbers of diagnosed cases for the entire Central Coast, and it’s a very big region.
“Recently authorities have released numbers by postcode, but even then, some of our postcodes cover a great many people and very extensive areas”, Spedding said.

“For example, there has been some talk of a hot spot in Gosford, but just saying Gosford is too broad a description.”
Spedding has been using his skills to map areas on the Coast with respect to coronavirus diagnoses.
“I’ve been using Census numbers and blending them with some of the data available so we can provide more information on what is going on in specific suburbs per head of population”, he said.
Spedding said he was pushing NSW Health to release more specific data.
“If we can get information at a suburb level, it would be more informative and useful in deciding which areas to avoid,” he said.
Spedding has set up a website with his latest mapping on COVID-19 cases.
The latest map of postcode level data is show adjacent.
“We can protect privacy and at the same time inform the public so that we can reduce some of the panic we are seeing, particularly in this region.
“As we say in business, if you don’t measure it you can’t manage it.”