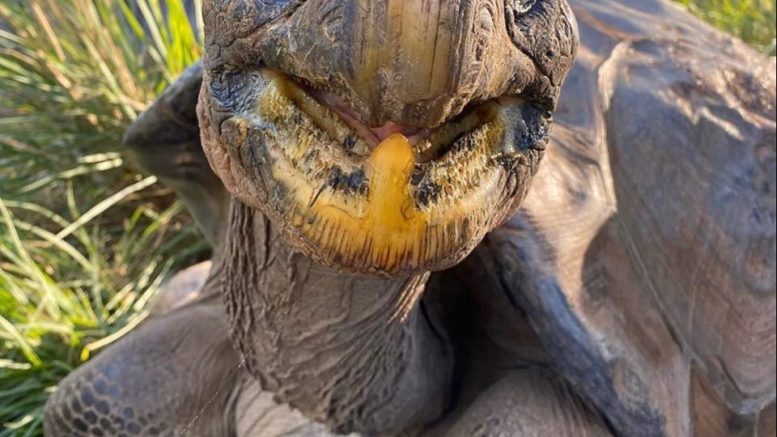 Hugo the Galapagos Tortoise starred in the inaugural livestream

The Australian Reptile Park has come to the rescue of locals battling boredom everywhere, launching a series of educational videos and a daily livestream featuring the Park’s menagerie of residents.

Mirroring the move of zoos around the world, the wildlife sanctuary and major tourist attraction held its first streaming session on March 30, after closing to the public the week prior in accordance with NSW Government COVID-19 restrictions.
Park General Manager, Tim Faulkner, hosts the educational ‘Animal Tales’ series, which sees him lead a kid-friendly discussion on some of the Park’s resident wildlife.
The daily live stream will also see zookeepers check in with their favourite animals and answer questions about them.
Faulkner said the streams will include everything from animal encounters to virtual tours of different areas within the Park, and that they’d offer a unique glimpse into the daily lives of zookeepers.
He added that staff were excited to be bringing their animals into people’s loungerooms and at bringing some cheer to the Coast during a tough time for many.
He also wanted to assure parents and guardians that Animal Tales was a credible resource.
“With so many people at home due to the current health situation happening around the world, we wanted to ensure that we created a way that they could keep in touch with nature,” Faulkner said.
“As a father myself, this is the kind of stuff I teach my kids about animals.
“I have consulted with teachers to ensure that the educational videos that we are making can assist teachers with the kids they still have in their classrooms, and parents with their kids at home, and align with the curriculum.
“With the live-streams, we wanted to keep the world up-to-date with our incredible animals and the amazing work that our keepers do, it never stops,” he added.
Both the Animal Tales series and the daily live stream can only be accessed through the Park’s social media, and the Park encourages viewers to put their wildlife questions on the videos, as well as, what animal they’d like to see next.
A weekly schedule, including streaming times, is also available on the Park’s social media.