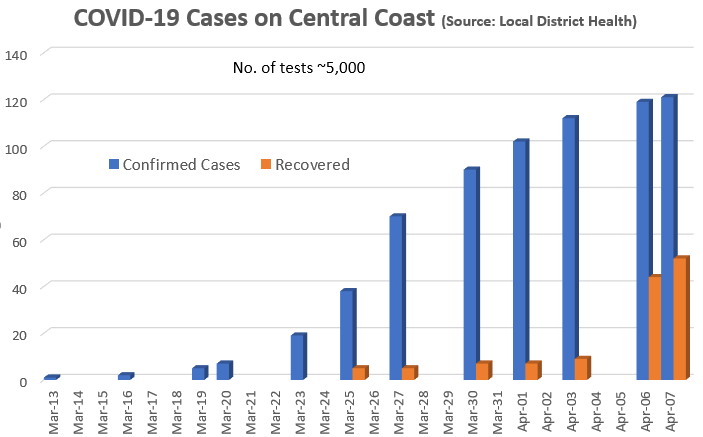 More positive signs are emerging that the Coronavirus curve is flattening in NSW, including here on the Central Coast, as the third week of social restrictions draws to a close.

NSW Health reports that, across the state, the number of new infections fell to just 48 in the 24 hours to 8pm Tuesday, bringing total cases to 2,734.
There were no further deaths in NSW which now stand at a total of 21.
On the Central Coast, the number of confirmed cases of COVID19 rose to 121 as at 8pm on Tuesday 6 April), an increase of just two over the prior 48 hours.
Chief Executive of Central Coast Local Health District (CCLHD), Dr Andrew Montague said that there had been nine people hospitalised on the Coast, but that seven of those had now been discharged.
There were no patients in ICU at this stage.
“As of yesterday, 52 of these 121 cases, or over one-third, that have now recovered.”
The implication of this is that there are just 75 reported live cases on the Coast.
It is thought that there are more cases however that have not been reported and authorities remain wary of the risk of a further spike in infections through community contamination if people ignore restrictions of travel and social gathering.
The CCLHD also advised on Tuesday (7 April) that a three year old child enrolled in Woodport Early Learning Centre in Erina was one of the latest to have been confirmed as having COVID-19.
This follows the temporary (one-day) closure of Kincumber High School last week after a senior stu-dent was also diagnosed with COVID-19.
Dr Montague said the three year old was in isolation with their family and doing well.
“They are contacted every day to check that they are well and if any family members develop symp-toms they will be tested,” he said.
Dr Montague also said all of the child’s close contacts, including those from the Woodport Centre, had been contacted and advised to self isolate and that there were no ongoing health risks for the centre.
The centre’s owners, Graeme and Steven Murphy, confirmed the child had not attended the centre since March 16.
“The management of Woodport Early Learning Centre has been assured by the Public Health Unit that we are very safe to continue operations following the very strict procedures that are already in place within the centre and that the contraction of the virus is likely to have occurred away from the centre.”