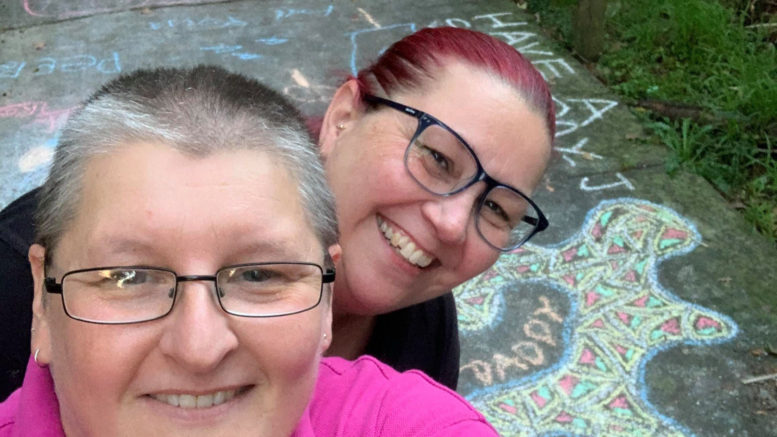 As strict social restrictions remain in place on the Central Coast in the face of the coronavirus pandemic, residents are coming up with new ways to stay socially connected.

For married couple Lorene (Loz) and Sharleen Thompson of Narara, it’s all about putting smiles on faces.

“Last week she bought a bunch of scratchies and we put them in envelopes with inspirational quotes.

“We have grandchildren who live with us, so we took the kids for a walk and put the scratchies in letterboxes all around the neighbourhood.”

On Easter Sunday the couple, who live close to a public walkway, decided to put a table on the path with some Easter eggs and a bucket of chalk, inviting passers-by to take an egg and leave a message on the ground.

“By Sunday afternoon there were a reasonable number of comments and by the middle of the week there were messages along the entire path,” Thompson said.

“It’s a well used walkway and people seem to be loving it.

“It gives people something else to think about and we are really pleased that despite the number of people who pass through, including youngsters, not one single offensive message has been put down.

“We are both lucky that we are still out and about working, as we both work in aged care, but the first thing we do when we get home is look at the new messages on the path.

When the rain comes

“It’s a great way of communicating while maintaining social distance and when it rains it will be gone.”

Thompson said the couple shares the images on the internet and on Faceboook to spread the fun.

“We are looking at buying our second bucket of chalk,” she said.

Thérèse Murray of The Entrance and several of her neighbours and friends have found a way to survive the pandemic with all of the Coast’s libraries closed.

“We have started a book club,” Murray said.

“I’m the only non-retired member and work full-time, so don’t have as much time to read as some of the others, who usually go to the library several times a week to borrow books.

“With the libraries closed, we’re exchanging books instead.

“We leave books on each other’s doorsteps with a knock and a wave.

“We text or email each other when we need more books and send silly jokes at the same time.

“This is perfect for some of my neighbours who are not on social media.”

But social media, of course, is providing a great deal of distraction for many, as Coast residents connect with family and friends around the Coast, in other parts of the country and even overseas via video chats and games on a number of websites.

“We had family members linked up on the Coast, in Sydney and in Melbourne,” Yvonne Berry-Porter said.

“The call started with a view of my grandson on the potty and we all cheered.”

Primary school teacher Hayden Cowley of Koolewong has established a new on-line game with friends all over the Coast and beyond.

“I’ve been playing darts with my mates via Facebook messenger,” Cowley said.

“We set up the camera on our dartboards and all keep score and chat while the game(s) are on.

“It’s fun trying to pick what the other lads get from a tiny little dartboard on the screen.

“We have named it Dartsolation.”

The McNeill family, also of Koolewong, set up a family bingo game via Zoom with about 15 family members of several generations taking part, from multiple locations, including Albania.

“We had scratchies, portraits and poems specifically designed to be mailed to the winners,” McNeill said.

For Aidan Cuddington and his wife Margie of Umina Beach, the answer to social isolation lies in lots of online interaction, complete with trivia hook-ups with friends.

But the trick, Cuddington says, also lies in the art of on-line conversation.

“In these testing times of isolation, and reliance on electronic methods of communication, one of the challenges faced by those of us in the ‘First World’ is finding topics with which to open and sustain conversations on line via Skype, Zoom or other systems,” he said.

“There are the all too obvious ones of ‘how are you coping?’, ‘how are the family?’ and the ubiquitous ‘did you get any loo paper this week?’, but then we find ourselves searching for something interesting to ask or say.

“It is difficult to discuss subjects such as music clips, funny videos etc because we’ve all seen them on the posts we’ve shared.

“There is no sport to talk about, unless you’re interested in racing or the political machinations and manoeuvring going on within the football codes as they desperately try to shore up their shaky empires, and we’re all up to date with political news worldwide.”

Cuddington’s solution was to come up with a set of suggestions to make verbal and particularly on line face-to-face communication easier in the present climate.

“Avoid posting some news on social media until after you’ve shared it verbally,” he said.

“Wear something different and invite comment, but be prepared for disparaging and possibly unkind words.

“Before your call, set all the participants up to present a few trivia questions for the others to answer; even just one or two can get the party started.

“Our group of regular trivia friends hold a weekly Zoom session where each participant asks seven questions; easy to prepare and fun.

“You can get as competitive as you please.

“Try and set up a background that invites comment from your viewers.

“If you are talking regularly, try changing your position within your home for each call.

“If you can, put a bit of music on in the background, just loud enough for others to hear but not so loud that it’s intrusive.

“Ask others if they want to play something while you’re chatting, you can arrange who plays what in advance if you like.

“Finally, remember the basic rules/principles of conversation and don’t fall into the trap of talking for the sake of talking as there is such a thing as a comfortable silence.

“The joys of technology mean that there is no excuse for not picking up the phone and asking someone if they’re OK, and showing you care without clicking on an emoji.”