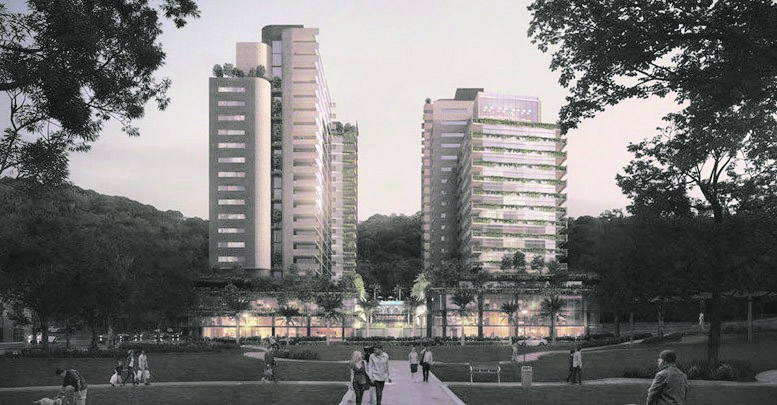 A proposal for a $345M five-tower development on the site of the former Kibbleplex building in Gosford has reached the next stage in the approval process, with the Department of Planning now considering the Lederer Group’s response to concerns raised in submissions on the project.

There would also be a shared vehicle pedestrian through site link between William St and Donnison St.

Apart from submissions from government authorities, only one major community submission was received, from the Community Environment Network (CEN), which outlines a number of concerns ranging from height and floor space ratios to aesthetics.

The submission says the amount of space allocated for commercial space is inadequate.

“The former Kibbleplex development contained much more commercial floorspace, including a large supermarket and several speciality shops, before Council bought the centre and converted it to a commuter parking station,” it says.

“There would be a negative community benefit from a development that will remove the 400 commuter parking spaces and replace them with a much smaller shopping centre than was originally on the site.”

The submission also claims that the applicant states in the Environmental Impact Statement (EIS) that it cannot provide evidence that the buildings will meet minimum building sustainability and environmental performance standards, because it has not yet undertaken sufficient design work.

“Is it reasonable for a consent authority to accept an applicant’s promise to meet minimum standards when the applicant has not provided even an outline of how they will meet these standards?” it says.

“The recent inquiry into the building certification process has concluded that ‘just-in-time’ design processes have been a major factor in many of the catastrophic structural failures that have occurred.”

The submission claims the project fails to achieve design excellence in relation to: protecting and enhancing key vistas and view corridors; relevant requirements on 14m height of street walls; street frontage heights; overshadowing; and, pedestrian and cycle access and circulation.

It further claims that the limits of a 28-day exhibition period have not allowed full documentation of CEN’s concerns.

“The visual impact of the street frontage walls is particularly problematic because of the proposal for four floors of parking above ground,” the submission says.

“This is unnecessary, since the geotechnical investigation indicates that at least three levels of car parking could be easily built underground.”

It also outlines concerns over: potential cumulative impacts due to other developments in the vicinity; how the future development potential of adjoining properties would be compromised; how the proposal would maximise street activation and provide sufficient open space and access for people with disabilities; the impact of the proposal on car parking within the Gosford CBD during construction and operation; and, measures to be implemented to promote sustainable means of travel.

The full submission and response can be viewed on the NSW Planning Department Major Projects website.

The project will now progress to the assessment stage.