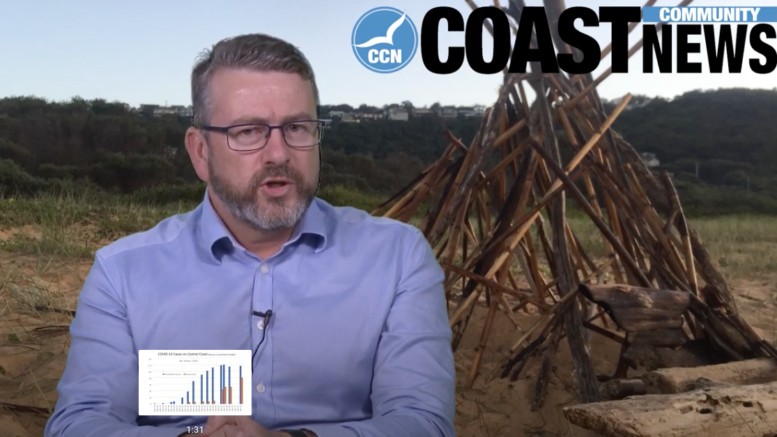 [April 15, 2020] Central Coast Covid-19 update. Well, authorities appear to have been largely successfully in keeping tourists away from the Coast over the Easter long weekend, but a few local residents were fined for social isolation infringements.

Another 30-year-old Wyong man who had earlier breached a public health order, was fined $1,000 for being near Gosford Railway Station without a reasonable excuse.

And then on Saturday afternoon, an 18-year-old man from Willoughby, who could not give a good reason for travelling to Avoca Beach and was also issued with a $1,000 fine and instructed to return home.

Thanks Ross, yes, the latest data from District Health which is from 8pm last night is that there were 115 confirmed cases on the Central Coast – that’s down from the previously reported number of 121 and that’s because some of the earlier reported cases that were categorised as Central Coast cases were in fact residents of other regions diagnosed here but who have since recovered and returned home.

As shown on the chart, there’s now a total of x people that have recovered and that certainly is a positive sign.

Gosford Hospital appears to have been successful so far in containing the cluster of 12 cases reported there over recent weeks.

The postcode-level data maintained by Patrick Spedding who we spoke with last week shows that highest concentration of cases is now in the Gosford 2250 area.

Notwithstanding the slowdown in new infections, the NSW Shadow Minister for Health, Ryan Park, has called on the NSW Government to expand testing for COVID-19 on the Central Coast.

Mr Park said the region, which has the fifth highest number of cases in the state, has been declared by the Queensland government as a virus ‘hotspots’ – According to Mr Park, anyone returning to Queensland from the Central Coast is being forced to self-isolate for 14 days.

And Ross, on Friday we’ll have more to say about Between the Cracks, the local racehorse trained at Gosford by our very own Angela Davies, who won the $400,000 Provincial Championships at Randwick last weekend.

In some sad news for rugby league fans, Easts Group today announced that it has decided to close Woy Woy Leagues Club permanently.

The club was temporarily closed under the Covid-19 restrictions, but the group made the decision to close the doors permanently after a proposal to develop the site was rejected by the State Government’s Independent Planning Panel.

Easts group Sports Director, Brien Sampier said it was with a heavy heart that Easts made the decision to cut its ties with the Woy Woy club.

Easts partnered with Woy Woy in 2012 during a period of financial distress and has struggled to get the club on a sound financial position.

Sampier said Easts Group would working with both members, both playing and non-playing to find a new club on the Peninsula.

He also said Easts would honour their commitment to contribute $20,000 p.a. over the next three years to the Woy Woy Juniors.

Ms Wicks explained that the Government will pay 50 per cent of the sector’s fee revenue up to the hourly rate cap based on the number of children in care during the fortnight prior to March 2; that is, before parents began withdrawing children in large numbers.

She said there will be services to waive gap fees for families who keep their children home and encouraged people who had terminated enrolment to get back in contact with your centre and re-enrol their kids.

Re-starting enrolment, she said, does not mean people have to send their child to childcare, nor be required to pay a gap fee, but it will hold the child’s place for when things start to normalise

And subsequently, the NSW State Government has also committed to paying for childcare facilities that missed out on the Federal Government package, including council-run centres.

Now finally, for something a little bit cuter than the coronavirus, the Australian Reptile Park has introduced their latest family member, a new baby wombat.

The Park has commenced a competition for whoever can come up with the best name for this little fellow.