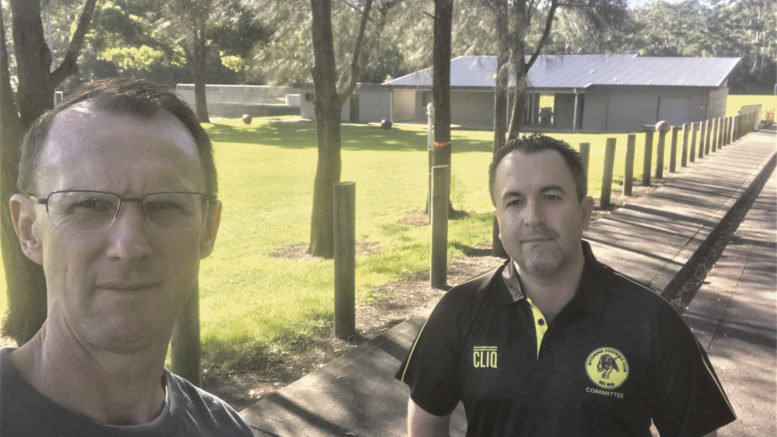 The fate of a controversial proposal to erect an Optus telecommunications tower at Alan Davidson Oval, Wyoming, will be debated at the next Central Coast Council meeting on April 27.

Councillor Kyle MacGregor will move that councillors refuse to grant a lease to Optus for land at the oval in the face of community concern.

A Development Application for the proposed tower was approved in June, 2018, but an application to modify the proposal was refused in September, 2019, with Optus forced to pursue a lease with Council under the original application.

The decision to grant a lease has been on hold since November, 2019, pending further community consultation by Optus.

Member for The Entrance, David Mehan, has called on Council to do all it can to stop the construction of the tower.

“This comes after a long dispute between Central Coast Council, Optus and the Wyoming community about the location of the telecommunications equipment with hundreds of local residents signing a petition to reject the tower in 2019,” Mehan said.

“Central Coast Council has continued to ‘note’ community concern about the proposal by Optus, but has failed to act.

“The community isn’t going to change its mind, they don’t want a telecommunications tower in a public park.

“Council needs to refuse the lease request and assist Optus to find a better location.

“Telecommunication towers should, wherever possible, be located on industrial land.

“That’s what the people of Wyoming have continued to ask for time and time again and this isn’t going to change with further community consultation.

“They simply do not want the tower at that location.”

Wyoming Football Club President, Scott Snodgrass, said his members, along with members of Narara-Wyoming Junior Cricket and residents, objected to the proposal on a number of grounds.

These included: lack of community consultation on the original DA; visual impacts to the area; the location of the proposed tower; and perceived detriments to health.

“Our members feel that the proposed location is anti-community,” Snodgrass said.

“It tests residents’ trust in a Council that on the one hand made tremendous structural and aesthetic improvements to the park, including a children’s playground, whilst on the other hand, proposes to erect a major structure within it.”

A report to councillors says Council received approximately 90 submissions to the Development Application that was refused in September, 2019, with most concerned with a perceived health risk caused by electromagnetic radiation from the tower.

The report says a decision to refuse the lease needs to be considered against the benefit of improved technology outputs for the community, with further community consultation and information sessions to be undertaken by Optus.

Cr MacGregor will further move that Council direct the Chief Executive Officer to: invite all telecommunication providers to develop a strategy for the co-location of telecommunications equipment which maximises service access and minimises the number of standalone towers required in an area and review Council’s processes to ensure the decision to lease Council land to a private business is considered before a development application is made and that there be wide community consultation.

But the report to councillors from staff suggests that these measures are unnecessary as the suggested approach is already undertaken by telecommunication carriers wherever possible and the current process for determining whether to lease land to a private business already requires extensive consultation with internal Council stakeholders and asset owners.