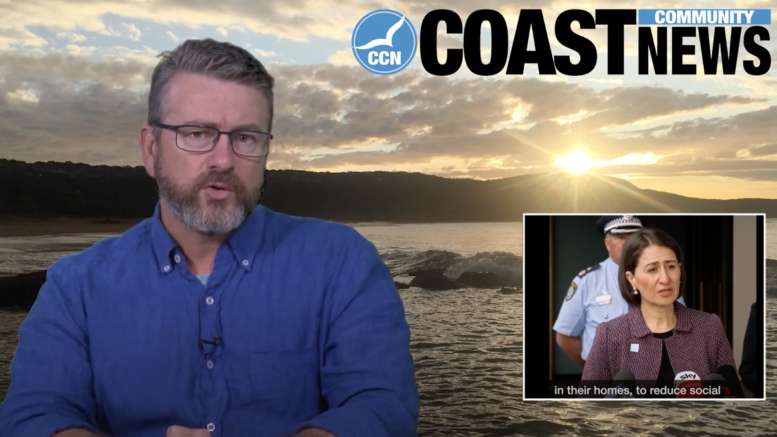 Well, there you have it – NSW Premier Berejiklian beginning what will likely be a gradual easing in COVID-19 restrictions over coming weeks and months.

In her press conference this morning, the Premier said that in addition to the resumption of face-to-face classes in NSW schools from May 11, from this Friday the 1st of May, restrictions would be eased two allow a maximum of two adults to visit another household for social or care reasons, with children permitted to come along.

She also acknowledged many retail outlets and offices would gradually were likely to restart normal operations in coming weeks.

A key element of the National Cabinet’s push to re-start economic activity is the use of the Federal Government’s COVID-19 App. David Abrahams will have more on that in a moment, but first, let’s update the numbers.

As at 8pm Monday, the Central Coast Local Health District has recorded 117 confirmed cases of COVID-19, that’s basically unchanged for over a week now.

Of these,115 have been released from isolation and just one person remains in hospital at this stage.

There have been more than 8,200 tests carried out on the Coast.

We reported last week a confirmed case at the Centrelink Call centre in Tuggerah which led to the temporary and precautionary closure of the building.

District Health confirmed today there have been no more cases connected with the Centre at this stage and that the office has since reopened.

Thanks Ross, more than 2 million people have now downloaded the CovidSafe App that authorities hope will help prevent a resurgence in Covid-19 infections as people begin to restart their lives.

The App uses Bluetooth technology to essentially make a digital handshake with other phones, recording the date, distance and duration of contact

Speaking on behalf of the Law Council of Australia, local representative Paula Wright said that the privacy settings of the App requires scrutiny.

The release of the App has raised some concerns about personal privacy.

The Law Council of Australia, for instance, says some details about the use of data have not yet been provided to support fully informed consent and that the government has not yet  made the source code for the App available to the public for independent audit as it said it would.

Member for Robertson, Lucy Wicks, assured everyone that a determination issued by the Federal Health Minister under the Biosecurity Act will ensure information provided through the App will only be used by authorised health officials and that all information will be securely encrypted and only retained for 21 days.

“Unless a person is diagnosed with COVID-19, she says, no contact information collected

in the app is disclosed or able to be accessed.”

Ms Wicks said that the more people who download this App, the safer the community will be and the sooner we can all get back to business.

Now, in other Covid news, a 62 year old Long Jetty man has been fined after visiting a supermarket in breach of self-quarantine obligations issued by his doctor, while a 67 year old local woman has been issued with a second $1,000 fine after being questioned by police at Gosford Railway Station after travelling from Newcastle with no reasonable excuse provided – it was later revealed she had been issued with an earlier $1,000 fine on April 18.

One hot item on the agenda was a motion brought by Councillor Kyle MacGregor to oppose the telecommunications tower planned for Allan Davidson Oval in Wyoming – that motion was supported unanimously and that’s something that will please locals and the Member for The Entrance. David Mehan who campaigned against the tower.

A second major point of discussion was how the Central Coast will position itself to pitch for its share of a $395 million funding package on offer from the State.

The package was announced by Parliamentary Secretary for the Central Coast and Member for Terrigal Adam Crouch.

Mr Crouch said the Central Coast council was a major provider of employment in our region and said the funding would help safeguard jobs and support the delivery of important infrastructure.

Now remember, Council staff were not eligible for JobKeeper Payment, and so the package includes $112 million for a Council Job Retention Allowance of $1,500 per fortnight for three months, $33 million to fund the Emergency Services Levy for local councils for 2020-21 and access to a $250 million loan fund to support local infrastructure.

Local Mayor Lisa Matthews welcome the announcement and said Council was actively seeking opportunities like this to secure employment for its workers and, in turn, support the local economy.

And it would be remiss for us not to commend the Council not only for an incredibly collegiate meeting but also for its ongoing commitment to transparency by livestreaming the meeting to the public … and while it was a long evening, we didn’t catch a single Councillor wearing pyjamas.

Motorists are advised of changed traffic conditions this week on the M1 for essential maintenance work to be carried out on the Mooney Mooney Creek Bridge.

Up to two lanes will be closed in both directions while work is carried out.

Thanks for joining us and we’ll see you on Friday for or next 5@5 bulletin and we leave you know with some tips on isolating Central Coast style courtesy of body boarder and photographer Ben Buchanan.

Presented by Ross Barry with David Abrahams. Filming and editing by Alex Herget.