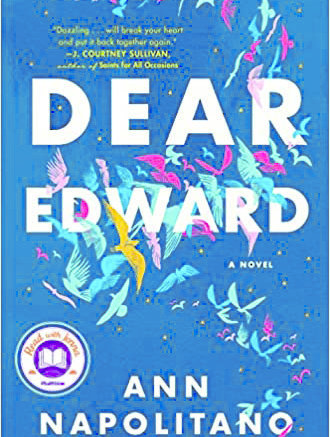 Of the 192 passengers, four of them are the Adler family – Bruce, Jane and their two sons, Jordan and Edward.

Bruce, a maths teacher, missed out on getting tenure at Columbia and, instead, home schools his sons.

Jane is a writer and has just landed a job writing a script for a movie – hence the move.

Among others on the flight are Crispin Cox, a successful Wall Street trader who is flying to California for an experimental treatment for cancer, and Mark Lassio, who is 32 and has been in Forbes magazine.

In economy class is Linda Stollen, a young woman coming to terms with an unexpected pregnancy, Florida who has been reincarnated many times and is now running away from her controlling husband and Benjamin Stillman, a black soldier who was shot in Afghanistan and now bears the scars.

We quickly discover that the plane has crashed and there is only one survivor – Edward.

His lone survival captures the attention of the nation.

In the hospital just after the crash, “So many eyes stare at Edward that the scene looks like a Picasso painting: hundreds of eyeballs, and then a smattering of limbs and hairstyles. An old woman reaches out to touch his hand as he passes. ‘God has blessed you.’

At just 12 years old, he finds himself suddenly alone and without a family.

He is taken in by his aunt and uncle, who have been unable to have children of their own and becomes friends with Shay, the sassy girl next door, who is convinced Edward has special powers.

Dear Edward switches between the plane, where the doomed passengers’ thoughts and backstories are revealed, along with all their hopes and plans, to a few years after the crash, as Edward deals with his injuries, the loss of his family, his new celebrity status and the guilt of being the sole survivor.

He especially misses his family, particularly his older brother Jordan whom he was closest to of all.

On one of his many wanderings around the neighbourhood at night Edward makes an unexpected discovery.

It turns out that Jordan had his own secrets. “Edward used to miss Jordan only for himself. It had been his terrible loss. Now he also mourns what his brother has lost.”

Edwards discovery leads him to answer some of life’s most profound questions:

When you’ve lost everything, how do you find the strength to put one foot in front of the other?

How do you learn to feel safe again?

And perhaps the biggest question of all: Why me?

She does a great job in building a connection which each of the passengers with their inherent flaws and complexities.

While it could have been a very depressing book it is written in a detached style that still cleverly draws out the heartbreaking tragedy of those killed as well as the vulnerability of Edward and the bleak prospect of his new battle for a meaningful life.

In many ways, it is a book for the times, given its focus on overcoming overwhelming heartbreak, grief and depression.

It isn’t a book you should read right before a flight but it is one that is definitely well worth reading.