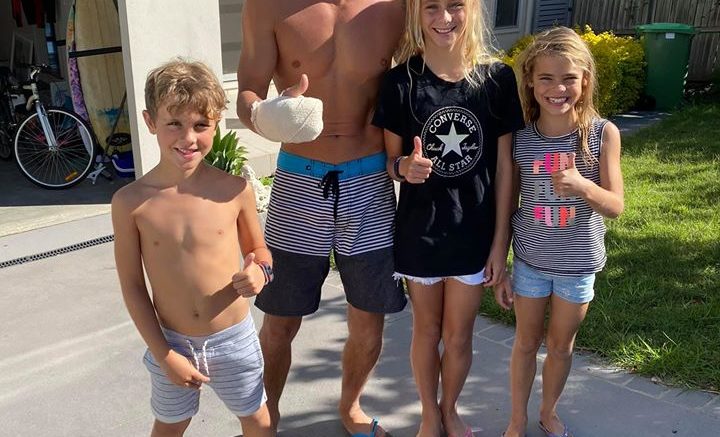 Hayden Edwards with his children

The man bitten by a shark whilst surfing at Wamberal Beach on Monday, April 6, has been identified as 38-year-old Wamberal resident, Hayden Edwards.

A spokesperson for Central Coast Council confirmed reports of the encounter.
“At approximately 10:15am, a surfer was paddling his craft at the local beach when he encountered what is believed to be a shark.
“The surfer suffered lacerations to his right hand.
“After making his way to shore, he was provided initial first aid by Council Lifeguards before being transported to hospital for further treatment.
“The incident is being investigated by NSW Department of Primary Industries who will attempt to identify the species involved in the attack,” the spokesperson said.
Edwards himself has since taken to social media to confirm the details.
An avid surfer, Edwards said that a perfect day in the water quickly became a nightmare.
“I’ve been surfing most days for as long as I can remember.
“As I wandered down the track to Wamberal Beach, I could see the water glittering from the sun, it was beautiful.
“I paddled out, but once I was out the back, the perfect day became a nightmare, as within a split second, a 6ft shark grabbed my hand, severing three tendons, and tearing a hole in it.
“I’m extremely lucky that it didn’t rip my arm off but unlucky that it happened at all,” Edwards said.
In his post he also thanked the Council Lifeguards and nurses and doctors that treated him and said he was now preparing for surgery to repair the tendons and the rehab that followed.
He also thanked the community for their well wishes and said he was keen to spend more time with his family.
“I just want to get back to my favourite thing in the world, being a dad to my three beautiful kids.
“Life’s short, don’t waste it,” Edwards said.