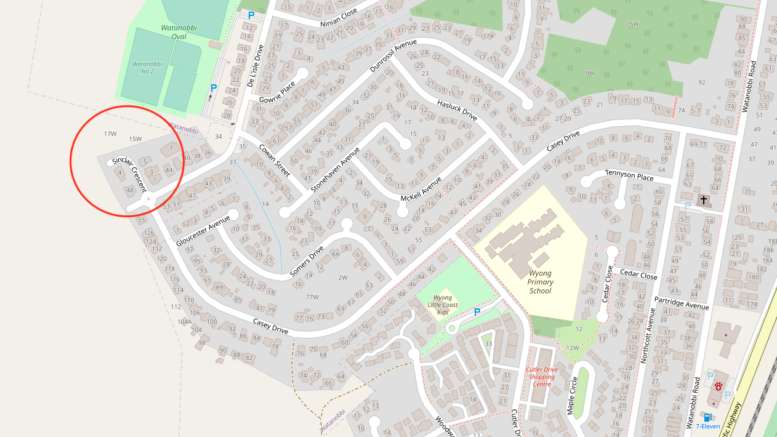 A 56 lot residential subdivision at 6 Sinclair Cres, Wyong, is being assessed by Central Coast Council.

The subdivision proposal by Transtra Developments is to develop 8.8ha of the 20.875ha site for low density housing, and the remainder will be retained as bushland for conservation purposes.

Stage 1 is subdivision of the site into 41 lots plus associated roads and engineering works, and stage 2 will be subdivision of remaining lots along the western boundary.

Porters Creek Wetland is to the west of the site and Chapmans Hill reserve to the east.

The development application included a Flora and Fauna Assessment Report by Conacher Consulting and concluded that the proposal was not likely to have significant effect on threatened species, populations, ecological communities or migratory species or their habitats.

The report said that potential impacts would be mitigated by the implementation of a Wildlife Management Strategy and tree protection measures during site clearing, an erosion and sediment control plan during construction, provision of stormwater detention basins, and a Vegetation Management Plan for the portion of the site not to be developed.

It was recognised that proposed roads and areas for stormwater management in the area to be developed, as well as a powerline easement, would reduce the overall ecological value as a fauna movement corridor.

The report by Conacher Consulting states that this was one of the principal reasons that any proposed development to the south be excluded from residential subdivision and instead, a 13.32ha portion be utilised for biodiversity conservation, including habitat protection and connectivity to offsite habitats to the north, through land to the west and along Porters Creek.

It is understood that the landowner and Council are in negotiations about the purpose of the non-developed portion and whether it will be managed as a biodiversity area or drainage reserve.

A flood assessment and stormwater management plan done by GHD concluded there would be negligible impact on flooding in the Porters Creek floodplain.

The GHD plan would discharge stormwater runoff via two detention basins to the north, draining water away from the floodplain and there is an existing detention basin north of Sinclair Cres with piped infrastructure connecting to the site.

The end of an era for youth services hub