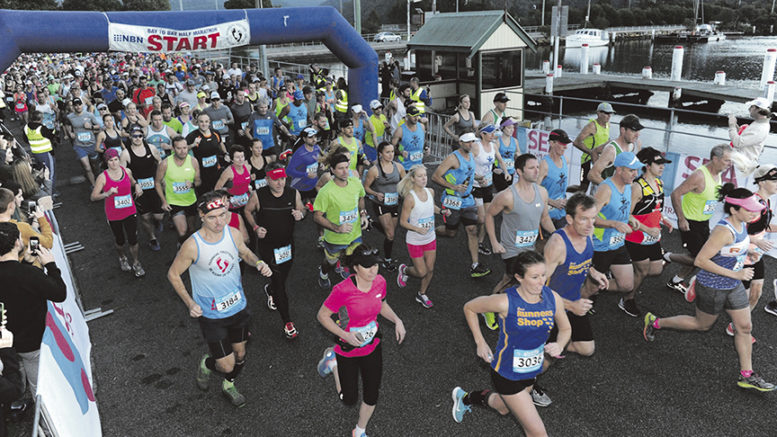 The 2020 Bay to Bay Running Festival has been cancelled.

The hugely popular charitable event was due to return for its 17th installment on June 14, and would have seen thousands of people from across the Coast and beyond descend on Woy Woy to make the trek along the Brisbane Water to Central Coast Stadium at Gosford.

The 2019 festival was the most successful one yet, smashing records, with over 3,000 runners raising more than $130,000, to be split between local charities and community groups.

Following that success, the Festival Committee had big plans for this year’s event, but when the first wave of COVID-19 restrictions came into effect, they made the tough decision to pull the plug on March 17.

While it was a bitter pill to swallow at the time, Festival Director, Jenny Barker, believes that the committee dodged a bullet.

“Planning for the festival is a monumental task and one that the committee does not take lightly,” Barker said.

According to Barker, it starts in October, with the nine month interim necessary to gather the necessary approvals, sponsors and volunteers to make the festival a success.

With that in mind, Barker said the committee wanted to make a clear and concise decision around the future of this year’s event.

“We had really high hopes for the 2020 Bay to Bay, but with the current situation, we just could not see how it could proceed as planned,” she said.

Barker said the committee had considered postponing the festival but noted that option presented several issues.

“We did consider postponing, but given how much planning is involved, we didn’t want to take the risk as there is no guarantee when large events like the Bay to Bay will be allowed to return.

“We just don’t know, and we didn’t want to leave things up in the air for our runners,” Barker explained.

If the festival had been postponed, aside from having to reapply for approvals from Central Coast Council and NSW Police, the event would then be competing with events traditionally held in the October/November period like the Central Coast Half Marathon and Relay for Life, as well as any other postponed events looking to return around that time.

“Cancelling was the right decision.

“This gives everyone involved clarity and peace of mind about what to expect,” Barker said.

Adding to that peace of mind, Barker said two thirds of the 3,000 or so runners that had already registered for the festival had been refunded, with the remainder taking up the offer to transfer their entry to next year’s festival.

“The Bay to Bay will definitely be returning in 2021”, with Barker confirming that the festival will take place on June 20.

Barker’s also found the silver lining in the cancellation.

“Woy Woy wharf is currently being upgraded and was going to disrupt the usual start point for the festival, but the works will be completed by the new date, so that’s something to look forward to,” Barker said.

In more good news, both major benefactors for the 2020 festival, Camp Breakaway and Aspire, have had their status transferred to the 2021 event, meaning they won’t miss out on valuable funding.