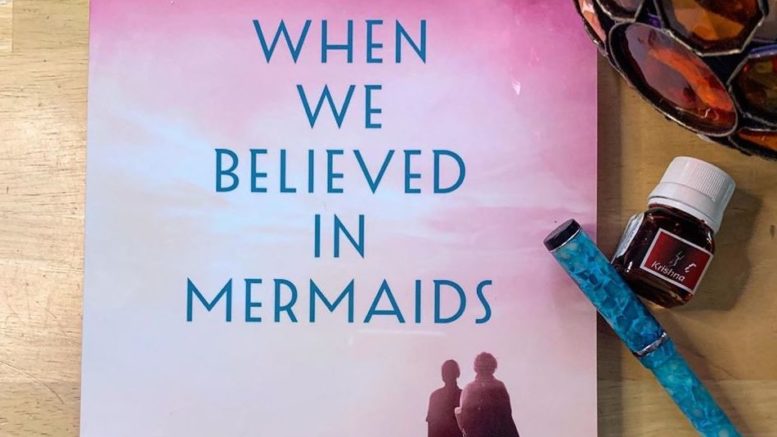 When we believed in Mermaids, book cover.

When we Believed in Mermaids The book’s blurb describes it as an “emotional new tale of two sisters, an ocean of lies, and a search for the truth.”
Author: Barbara O’Neal Publisher: Lake Union Publishing

That grabbed my attention and the opening chapters really pulled me in – but, then I felt I had been misled.
We meet Kit as she finishes a six-hour shift in the ER.
A television in the break room broadcasts a disaster, a nightclub fire in New Zealand, when her attention is caught by the image of a woman stumbling through the smoke and debris.
The image is unmistakable – it is her sister, Josie.
The problem is that her sister has been dead for 15 years.
(This is where I got hooked – Josie was killed by terrorists on a European train, vaporized, the same word used to describe what happened to a friend of mine in the World trade Centre.)
Kit, naturally, is overwhelmed with emotions – grief, loss, anger.
Her mum, Suzanne, also sees the footage and also believes she saw Josie.
Suzanne convinces Kit to go look for her sister.
We then meet Mari.
Mari is married to Simon, who is perfect.
They live in Auckland, have two children and their life is perfect. (naturally, I hate them).
Simon has just bought her Sapphire House, “a two-story Art Deco mansion overlooking the harbor.”
It was the house of Veronica Parker, a murdered film star from the 1930’s.
As Mari wanders around the mansion her thoughts turn to her ten-year-old self and her sister.
During Kit’s flight to New Zealand she recalls her dysfunctional family.
Her parents owned a restaurant, her father cooked, while her mum minded front of house. Josie and Kit were often left to their own devises as mum and dad were too busy arguing, drinking, or loving.
Dylan was a troubled boy that came into their lives and took care of the girls.
He taught them to surf, made sure they went to school.
Josie was a rebel when she was younger and later on an addict.
When Kit arrives in New Zealand and starts to search for her sister, she meets Javier, a dashing Spaniard and famous guitarist and dabbles in a little romance.
Kit really doesn’t do romance, except for James, from high school.
The story then begins to present questions in the reader’s mind. Can Kit accept love? Will she ever find her sister? What will happen when she does find her?
At this point, the book turns sharply south – I continued reading it because I bought it and I hate wasting money, but I’d lost interest – I felt a bit manipulated.
I did a search and find out that the genre is “romance novel”, “chick lit”.
Yikes! I chose poorly.
Basically, When We Believed in Mermaids is a story of childhood, of lost innocence, passion and of long-hidden secrets and betrayals – lies that must be faced for two sisters to be whole as adults.
Frankly, it doesn’t really get there … and there’s not a lot of passion either.
This is what I get for judging a book by its cover.