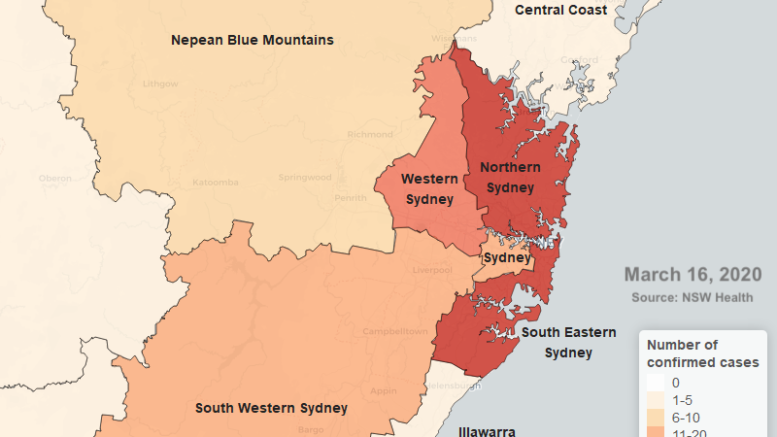 [March 16, 2020] The Coast has its first confirmed cases of Coronavirus.

The Central Coast Local Health District (CCLHD) confirmed on March 13 that a woman in her 30’s is the region’s first official COVID-19 diagnosis.

In a statement, a spokesperson for the CCLHD said staff were undertaking daily wellness checks while she is in isolation at home and that the patient was doing well.

They also confirmed an investigation into how the patient became infected was underway and that all her close contacts had been contacted and advised to self-isolate.

The spokesperson said the patient’s close contacts were also being contacted daily by the CCLHD Public Health Unit to monitor their condition and will be promptly tested if they develop symptoms.

In a statement on March 16, the CCHLD confirmed the second case.

“The CCLHD is providing care for a woman in her 40’s who has been diagnosed with COVID-19 after recently returning from overseas,” the statement reads.

The second woman is also in isolation at home with the same procedures being followed as in the first case.

The cases are not believed to be related.

“Please be assured, NSW Health notifies the public of any locations where there has been a risk of infection.

“This is so members of the public can monitor their symptoms and seek medical assistance if they become unwell.

“Anyone diagnosed with COVID-19 and their close contacts should go into self-isolation to ensure there is no ongoing risk of infection.

“Locations where these cases live, work or have visited do not pose any ongoing risk to the public.

“Publishing private details, such as the location of individuals diagnosed, is a breach of privacy and serves no public health benefit,” the statement reads.