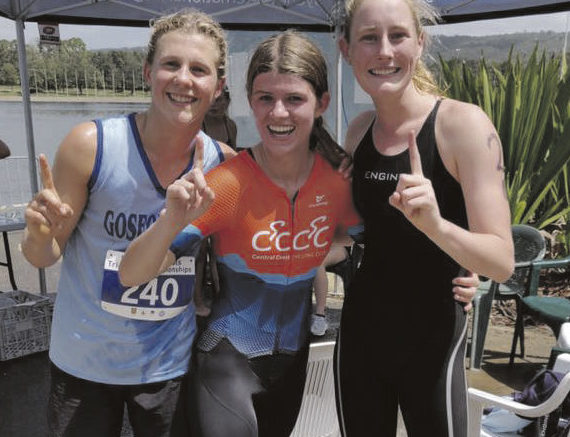 Competing against some high rated opposition, the trio of Ellie Richardson (swim), Anya Tatarinoff (cycle) and Zoe Clarke (run), showed some serious athleticism and determination to come from behind to take the gold medal.
Ellie Richardson laid the groundwork with an outstanding swim, finishing a close fourth behind some very talented state swimmers.
“I was a bit nervous and that swim distance was a bit shorter, and so I just knew I had to find some clear water and sprint toward the finish,” Ellie said after the event.
Cycling dynamo, Anya Tatarinoff then brought the team even closer to the lead with a grinding ride around the 15km track.
“My legs were hurting. I was feeling good, but the wind was so strong, so I was just hammering it and trying to get the team into a good position for the run leg,” Anya said.
Zoe Clarke then produced an inspired 3km run to take the lead only a few hundred metres out from the finish and cross in first place.
“I just knew I had to give it my best shot, 3km is shorter than I usually like to run, so I knew that I didn’t have a lot of time to catch up, so I just sprinted as fast as I could and then I saw first and second not too far ahead of me, and so I just went for it,” Zoe said.
It was an amazing win for the Year 11 girls who have worked hard to maintain their training schedules on top of an increasing academic workload.
“Yeah it was amazing, we definitely didn’t expect that.
“We knew there was a lot of tough competition there on the day, so it was great to come out on top,” the girls said after the event.
In an amazing double for the Central Coast, Tuggerah Lakes Senior College (TLSC), Berkeley Vale campus, also took gold in the senior boy’s All-School event.
Blake Hessel, Lincoln Hey and Bryn Gaha produced outstanding performances to defeat a field of 85 schools from across NSW.
The TLSC girls also competed fiercely, taking out the bronze medal in the CHS event.