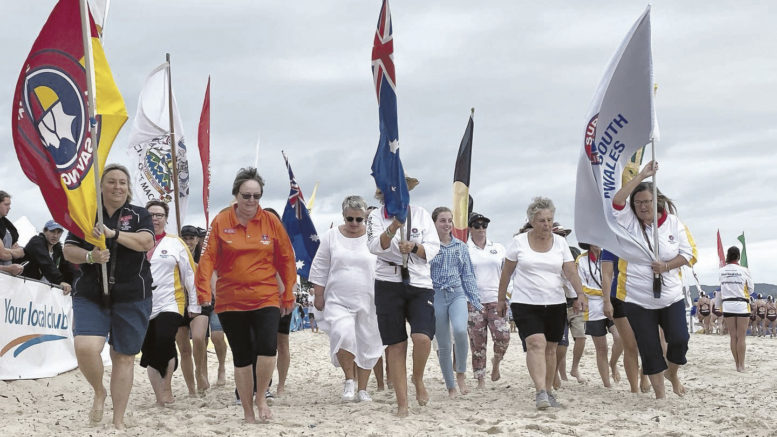 In celebration of International Women’s Day an inspiring group of women pioneers in the surf life saving movement came together at Surf Life Saving NSW’s State Championships on March 8.

Together they formed a Colour Party and proudly led the official March Past for the Championships.

They marched to recognise the contribution women have made to the Surf Life Saving movement throughout its 113-year history.

While 2020 marks the 40th anniversary of women’s formal participation as active surf lifesavers, the involvement of women in Surf Life Saving began well before 1980.

Women have had an active role in the movement since its inception, including those who served as surf lifesavers during WWII and were awarded their Bronze Medallions retrospectively just a couple of years ago.

The All Female Colour Party was the first of many activities planned to celebrate the achievements of women during the 40th anniversary year.

Then in 2017 she coordinated the First Female Lifesavers recognition event, where women who were wartime lifesavers were presented with their Bronze Medallions by the Governor General.

“Celebrating 40 years of women in Surf Life Saving, it was wonderful to share it with a group of women that have contributed so much,” said Cole.

“It’s so fabulous to see women so totally involved now in every aspect of Surf Life Saving and welcomed and appreciated.

“This hasn’t always been the case but certainly is now,” she said.

March Pasts are a traditional event at surf sports carnivals.

Colour Parties form part of the March Past event, their history stemming from the military tradition where service people and volunteers marched carrying flags.

It comes after Surf Life Saving NSW recently launched an initiative to identify pioneering women in the Surf Life Saving movement who drove change and paved the way for all women to become active surf lifesavers.