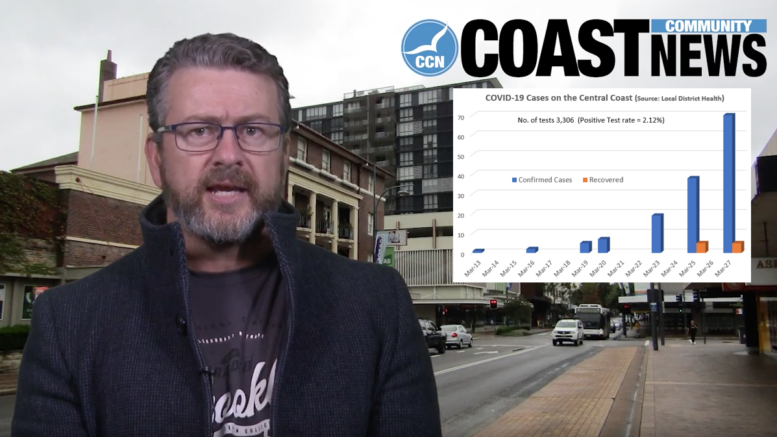 This week we’ll update you on the latest Covid-19 news, some initial impacts on local business and jobs, some things Coasties are doing to keep their businesses open, an update on library services from Mayor Lisa Matthews, a meeting of commercial fishers to discuss the contraction in local fishing operations as well as all the latest in local sports news.

Central Coast Local District Health has just now advised us that the number of confirmed Covid-19 cases here on the Central Coast has risen to 70, an increase of 32 cases in the last 48 hours.

This chart shows the increase in cases since the first case was reported on March 13.

The increase in cases in the last 48 hours is slightly lower than in the prior 48 hours to Wednesday – that’s something worth keeping an eye on in coming days.

District health has also now released information showing the total number of tests conducted on the Central Coast is 3,306, implying a positive test rate of just 2.1%.

We also note five confirmed cases have recovered and all others are at home in isolation (in other words, there are no current hospital cases).

On Wednesday, Local District Health also advised they would be re-prioritising surgery cases to free up capacity for intensive care units and conducting outpatient clinic appointments over the phone or by video to reduce close contact.

Chief Executive Dr Andrew Montague stressed that there would be no impact to emergency and trauma patients or urgent surgery cases, and that medical staff will communicate directly with affected patients about rescheduling where necessary.

Earlier this week, Prime Minister Scott Morrison announced a set of new restrictions to control the spread of the virus.

These messages included, among other things, a ban on all overseas travel, a ban on all real estate auctions and inspections, restrictions on the number of people attending weddings and funerals, a ban on family barbeques and gatherings, the closure of cinemas and theatres as well as all pubs, clubs, restaurants, cafés and other food venues, except for takeaway or delivery services.

By Wednesday, hundreds of workers in the hospitality sector were let go and the IT systems for Centrelink and MyGov began to break.

Several people spoke of waiting in line for four or five hours just to get a registration number to access online assistance.

The NSW government has enacted all the Federal Government shutdown protocols here in NSW.

In addition, on Wednesday, the State Parliament passed 20 new emergency measures which included among other things:

3. Reducing physical court appearances and allowing the conditional release of some, low-risk offenders from prisons and

4. Changes to planning laws to ensure developments that protect community health, welfare and safety can proceed without normal approvals

Council libraries may be closed, though Central Coast Mayor Lisa Matthews is reminding local families stuck at home of the huge range of electronic library resources available. We dialled in an interview with the Mayor in her home office this week.

Well, on a brighter note, one business that has moved quickly to new ways of working remotely is Central Coast Dance School has who’ve opened up their dance classes online.

Let’s go to someone who is no stranger to a salsa, David Abrahams.

The summit featured five speakers from within the Central Coast community who are all making a signiﬁcant contribution to this goal.

Commercial fishing operators across the Coast are struggling to stay afloat in the wake of State Government reforms to the industry that commenced in 2016.

Fishers met with the Shadow Minister for Primary Industries, Jenny Atchison in Woy Woy on Monday to discuss the large reduction in fishing days and the contraction in the local industry more generally.

Secretary of Wild Caught Fishers coalition, Mary Howard, said that many commercial fishers have been forced to exit or take on debt to buy more “shares” just to keep their business going.

To sport and after weeks of speculation, the International Olympic Committee has announced the 2020 Tokyo Olympics will be postponed for up to one year.

The postponement recognises both the worldwide restrictions on public gatherings.

The decision is a symbolic one – the Olympic Flame has been a beacon of hope to the world during troubled times – but there are mixed feelings among athletes, including as many as a dozen local athletes here on the Coast who had already qualified or were seeking to qualify for the games, many of whom have found it impossible to maintain training schedules given the closures of gyms, stadiums, swimming pools and other sporting amenities..

One exciting local sporting achievement is that Central Coast Grammar Student, Taylem Barnard, who two weeks ago broke the school record for the 50 metre freestyle.

Taylem covered the distance in just 27.40 seconds – and there’s a name to watch out for in coming years.

Well, in the wake of the Coronavirus crisis, some businesses are in fact experiencing a surge in demand, no more so than in food delivery.

Coles and Woolies are adding more staff to cope with higher demand and, earlier this week, we spoke with local company Nurtured Organics who deliver fresh fruit and vegetable and whole foods.

Please stayed tuned to our website for rolling updates on the evolving COVID-19 situation here on the Central Coast – our next Covid-19 bulletin will be Monday afternoon, in place of our regular Around the Grounds program.