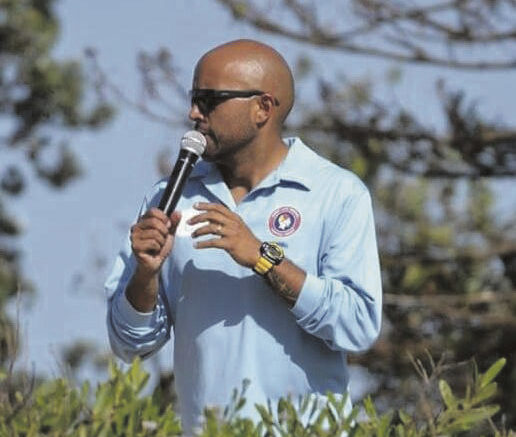 Umina Surf Life Saving Club’s Mr Harold Marshall has been given the role of providing livestream coverage of Surf Life Saving NSW’s State Championships as well as hosting a highlights show which will be aired on Fox Sports.

The role will see him cover the Champion Lifesaver Patrol Competition and Age, Open and Masters Championships from February 22 to March 8 for the livestream.

A long-time member of the club Mr Marshall said being a part of the surf lifesaving movement had helped everyone in his family find their place within the community and contribute in a way that meant giving back and becoming happy, healthy individuals.

“The best part is being able to spend so much time with my wife and kids while teaching the real values that will get them far in life,” he said.

“Ayya, my eldest daughter was really enjoying her time in Under-8s back in 2010 and I wanted to get involved too. “I wasn’t a great swimmer, never paddled a board and had no tangible first aid skills.

“My wife knew my limited capabilities and encouraged me to try.
“I did and have never looked back, always looking for more opportunities to help out in any capacity,” he said.

Mr Marshall said he had always measured his children by how much fun they were having, how many new friends they had made, what they had learnt and how they had made a positive contribution back to the club and community.”

He had no idea that walking through the doors of Umina Surf Club 10 years ago would have such a profound effect on their family and their lives.
“Family is everything to us at Umina. “It’s not your own bloodline but everyone dons the black, blue and white cap.

In 2011 Mr Marshall gained his official’s accreditation and has been religiously on the beach at surf events since. He said being an official had been great for him.

“You always have the best seat in the house, first up,” he said.
“Also, you’re actually helping. You get to be part of the fabric of the event.

“You learn so many technical aspects of sport from watching the best athletes right down to the fine details of the surf sports manual,” he said.