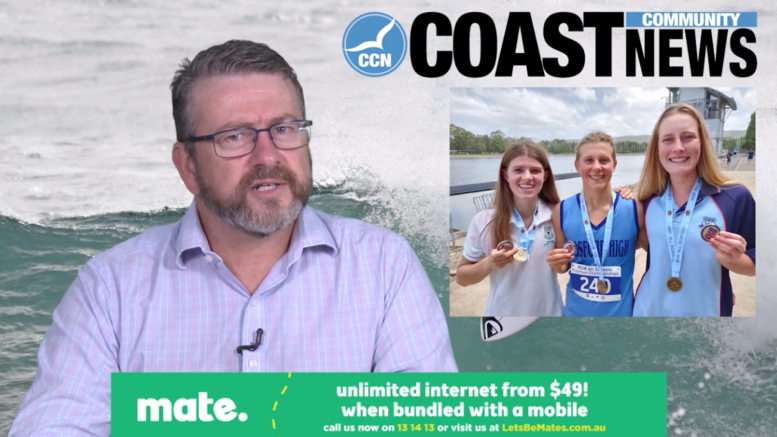 The weekend’s sports report from across the Central Coast. Hi I’m Ross Barry. Thanks for joining us for this, our compact video wrap of the weekend’s local sport.

It was a big day out for Gosford High School’s senior girl’s triathlon team of Ellie Richardson, Anya Tatarinoff and Zoe Clarke.

The trio showed some serious athleticism and determination to win the NSW All-Schools Championships at the Sydney International Regatta Centre, upstaging some pretty highly rated opposition.

Competing in the U15 NSW Track Championships, Liliya competed in five events – the 500 metre time trial, the scratch race, the Keirin, sprints race and the points race.

She won gold in all five.

And a big cheerio to Kincumber High’s 9K this morning.

Tascott high jumper Nicola McDermott was at it again this weekend, this time in Wellington where she once again went head to head with rival Eleanor Patterson.

Both women cleared at the Olympic qualifying height of 1.96 metres but it was the Victorian who this time managed to clear at a new personal best height of 1.99m, just a centimetre away from a national record.

Well, to surfing and Avoca Beach played host to elite surfers from all over the world at the Vissla Sisstrevolution Central Coast Pro, a World Surf League qualifying event.

He only took two waves but made them both count in the quarter, including this one.

But he was subsequently defeated by Port Macquarie’s Matt Banting in the semi who then went on the clinch the final.

Just when you think things couldn’t get any worse for the Mariners, Western united handed them a 6-2 drubbing in Geelong yesterday.

Well, it was a dramatic conclusion to the final Round 18 in First Grade cricket this weekend, in which Northern Power snatched a spot in the semi-finals.

Recommencing at 2-53 on Saturday, Power quickly passed Wyong’s first innings total of 111 losing just 4 wickets and then sent the Roos back in.

Wyong could muster little resistance to an onslaught from the Power bowling attack including Brendan Charlton and Matt Howarde who took 5 for 22 off 9 overs and they were bowled out for just 63 runs.

Northern Power needed just 19 overs to overhaul the required total of 62 with the loss of just 3 wickets.

Meanwhile at Jubilee Park, the Entrance (who were sitting in fourth place) put on 196 in their innings against Kincumber-Avoca, with C Dunkerley top-scoring with 58.

But it was not enough in the end as the Griffins piled on the runs with an opening stand of 120 between Harry Woodhead and Jay McRae.

The Griffins reached The Entrance total with 8 balls to spare.

And we’ll bring you all the action from the first week of semis next week.

Finally, two central coast boxers are off to an Olympic Qualifying tournament in Jordan.

Well that’s all for this week.

Check out the internet and mobile phone deals on offer from MATE, proud supporters of sport on the Central Coast.

And we’ll see you next Monday with another wrap from Around The Grounds.