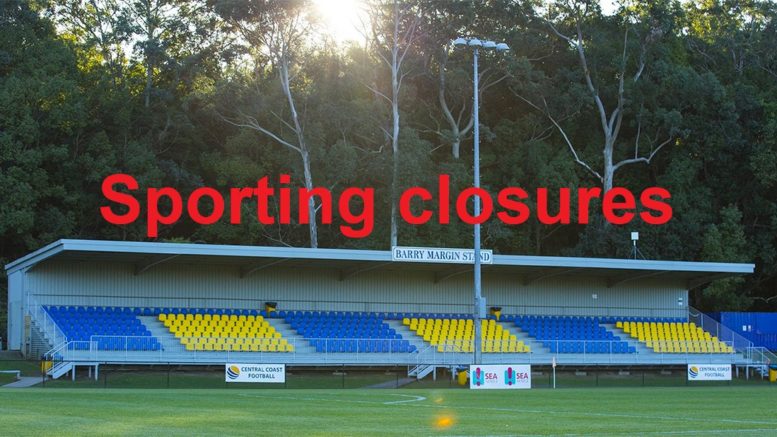 Widespread sporting closures due to the coronavirus.

All remaining Hyundai A-League and Westfield W-League games in the 2020 season will be played behind closed doors and closed to the public
All sanctioned grassroots football competitions and associated training will be suspended from Wednesday, March 18 until Tuesday, April 14.
In addition, the Central Coast Mariners office in Tuggerah is closed to external visitors.
Staff will still be available by phone on 02 4353 7200 or emailing info@ccmariners.com.au.
The training facility at Tuggerah is also closed to all external visitors.

All community rugby related activities are postponed until the first week of May.
Therefore, there will be no training, no games (including trials, competition matches and representative rugby) during this time and the CCRU recommend limited face-to-face meetings.
The CCRU Board has indicated that it will do everything it can to hold a (revised) 2020 competition, hopefully commencing from May 16, with a format to be confirmed.
The Season Launch has been cancelled.
Xplorer Training at Breakers is cancelled.
Club Council meeting at Bateau Bay Bowling Club on March 23 is cancelled.

The NSWRL has announced that all 2020 Community Rugby League competitions and activities have been postponed until at least May 1, effective immediately, in response to the COVID-19 pandemic.

Cricket NSW announced its support of Cricket Australia’s strong recommendations and will immediately stop playing cricket at all levels for the remainder of the season.
They advise that all other associations and competitions across NSW should cancel their remaining matches and seriously consider cancelling or postponing end-of-season functions.
McDonald’s NSW Premier Cricket titles will be awarded to the Minor Premier in each grade.

Central Coast Basketball has indicated business will proceed as usual, with the situation being assessed daily, but with the following restrictions to apply to Domestic Basketball Competition, Aussie Hoops, Domestic Skills Program, Basketball Minis, Sunday Scrimmage and External Hirers.
People in attendance will be limited to essential support personnel and parents (limit of one parent per player) and anyone experiencing symptoms or who has been in contact with someone with the coronavirus should not attend.
People over the age of 50 should reconsider attending games.
Anyone entering the building will be required to use (provided) hand sanitiser.
To avoid congestion in the foyer during games, players and spectators are to arrive to the stadium no earlier than 10 minutes prior to the scheduled start time and exit via alternate doors.
Canteen will be closed.
Sign in sheets and information forms will need to be completed, which include a declaration regarding overseas travel in the last 14 days.
School groups using the stadium will be required to follow the above procedure.
For Representative Programs (Central Coast Crusaders and Rebels), team training will continue as normal and provisions will be made at external venues to ensure the health and safety of our athletes and staff.

Athletics Australia and all State Member Associations have decided to postpone all competitions and events until May 1 at the earliest.
This includes local and state cross country, track and field and road events.
Competitions have already commenced in some states, so for the latest information and updates, the relevant Member Associations should be contacted.

The Central Coast Hockey season start will be delayed by six weeks to May 2, in accordance with advice from Hockey NSW.
Hockey NSW will be posting updates about the state of the sport to its website as they become available.

Netball NSW announced on March 16 that the season’s launch has been pushed back by more than a month to May 2, as the sport adopts Coronavirus control measures.
A spokesperson for Netball NSW said this should include all activity: playing, training, grading, umpire training etc. at all levels up to and including Metro League/Regional League.
Gosford Association Secretary, Leanne Phillips, said her Association would be complying with all directives from Netball NSW and had committed to the postponement of games, training and events.

Surfing NSW has made the decision to reschedule and/or cancel all events until the end of April.
Cancelled events include the Billabong Oz Grom Cup.
The Hydralyte Sports WSL Pro Junior, the Northern Beaches Junior Regional Titles and the Barney Miller Classic will all be postponed until further notice.
Surfing NSW will be processing refunds to cancelled events.
The NSW Longboard and SUP Titles are currently still set to take place throughout early May at Port Stephens.
Surfing NSW will not be running any scheduled Surfers Rescue 24/7 courses in March and April and will endeavour to reschedule all affected courses.
Locally, SLS Central Coast has cancelled the remainder of the season’s activities including Branch Masters and Opens, the 2 remaining Streets Boat Series events, the Youth Leadership Camp, and the Beachletics event.

Baseball NSW advise that it will be postponing all baseball related activities from Wednesday, March 18 until Thursday April 30.
This includes all training, organisation activities, team meetings, events, tournaments and competitions during this period as well as the following events: 2020 Australian Women’s Championships – scheduled for April 10-17 has been postponed; 2020 Performance Pathway Program – scheduled for April has been postponed to May; 2020 Super Series – scheduled to begin April 19 has been postponed until further notice; 2020 Charter Little League State Championships – all postponed until further notice; 2020 State League Finals, Womens League Finals and Winter League Competitions scheduled to begin in April will be all be postponed until Saturday, May 2.

The Central Coast Stadium 20-year Anniversary that was planned for March 29 has been cancelled.
The NRL Round 2 game Roosters v Sea Eagles match scheduled for Saturday, March 21, will be played at Leichhardt Oval instead of Central Coast Stadium- and will still be closed to public.
All sporting competitions of large group participants at Council-run leisure centres are also cancelled.

If you would like to make an announcement via CCN regarding Covid19 related cancellations please email us at: covid19news@centralcoastnews.net