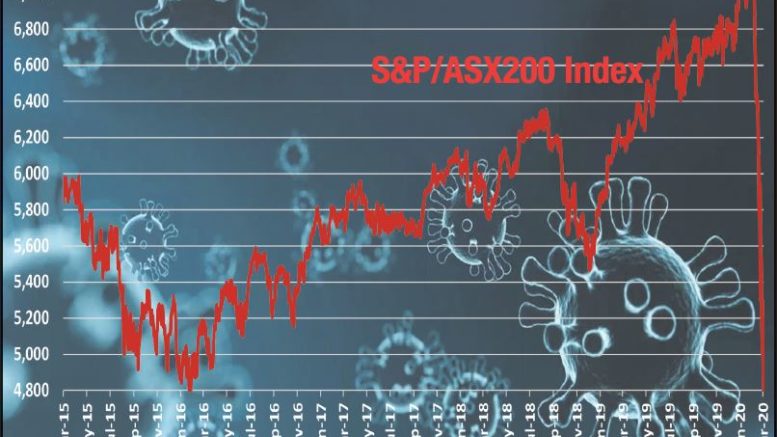 The Australian share market continued to slide this week in response to the global spread of the coronavirus and increasing concerns over the subsequent economic impact.

As at Thursday, 2pm, the S&P/ASX200 Index was at 4,800, a fall of over 33 per cent from its historical high set less than a month ago.
Some of the biggest falls in the past week have been in bank stocks, as the market contemplates a jump in defaults on business loans and mortgages.
Oil and gas stocks have also suffered big losses in response to the fall in oil prices from over $60 a barrel to just $25 a barrel in recent days, while the $A has fallen to as low as US55 cents.
Earlier in the week, alarm bells were raised over the possibility of global bankruptcies of airline companies due to widespread travel bans.
This prompted Prime Minister, Scott Morrison, to commit to a $715 million aviation package to support Australian carriers, including cash refunds of government charges on aviation fuel and regional security.
On Thursday however, the Qantas share price was languishing at $2.10, down from over $7.00 in February.
The plight of the airlines however is playing out across a much wider range of industry sectors, where enforced shutdowns and supply chain disruptions have caused cash flows to completely dry up.
Many bank stress tests show that their corporate borrowers are resilient to a 20 per cent fall in profits over a year or so, but very few ever contemplated having no cash flow at all for three to four months.
And that three to four months may well now be six to twelve months according to some economists.
Westpac’s Bill Evans earlier predicted Australia would fall into a brief recession, and that the government’s $18B stimulus package would offset much of the contraction.
On Wednesday however, Mr Evans said recent developments in the past week have led him to revise his prediction downward.
“Our revised estimates of GDP growth in the March and June quarters, after adjusting for the Stimulus Package, are minus 0.7% and minus 0.3% respectively, a total contraction of 1% of GDP,” Mr Evans said.
He also predicted the national unemployment rate would rise to over 7 per cent.
Against that backdrop, the government is unleashing an unprecedented level of economic stimulus, beginning with an initial package of $18B, including cash payments to pensioners and a release of PAYG withholding taxes for small businesses.
On Thursday, March 19, the Reserve Bank cut official interest rates by 0.25 per cent to 0.25 per cent, the lowest level ever in Australia.
Home mortgage rates have subsequently fallen to below 2.5 per cent in many cases, providing a much needed boost to household disposable incomes.
Whether it will all be enough remains to be seen.