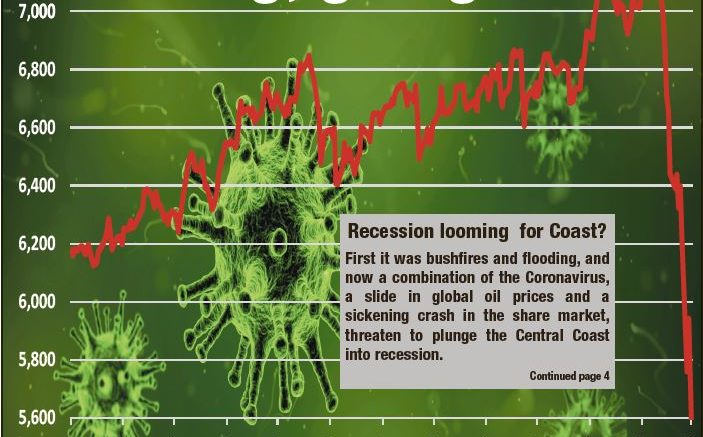 First it was bushfires and flooding, and now a combination of the Corona virus, a slide in global oil prices and a sickening crash in the share market, threaten to plunge the Central Coast into recession.

As at 2 pm, Thursday (March 12), the S&P/ASX200 share price index had fallen over 25 per cent from its late February highs, wiping out the past three years of gains, equivalent to $450B.

Some of the largest falls were in oil and gas stocks, after the price of WTI Crude Oil fell virtually in half, from over $60 a barrel to just $33 a barrel, while bank stocks and other financials have also fallen heavily.

Travel-based stocks have been particularly hard hit, with Qantas falling in half from $7.40 a share to just $3.70 a share, and Flight Centre declining from $70 this time last year to just $19 this week.

Share market losses are likely to impact on many retirees on the Coast who are already suffering from historically low returns on cash and bonds and depend on their superannuation savings to live on.

Depending on which Investment Options members select, their exposure to the share market can be typically anywhere from 20-60 per cent of their savings.

The share crash is expected to torpedo an Australian economy that was already turning down prior to Christmas.

Data released this week show that Australia’s economic growth slowed to just 0.5 per cent in the December quarter, prior to the impact of bushfires, floods and the outbreak of the coronavirus.

Since then, data for retail sales and new home building activity data, two key pillars of the Central Coast economy, have both pointed to an economic contraction in the first quarter of 2020.

Not surprisingly, many economists are quickly revising down their forecasts for the rest of the year, with several now predicting two consecutive quarters of negative growth, a technical recession.

The impact of the COVID-19 virus however, remains highly uncertain.

So far, there are no reported cases on the Central Coast, but no one really knows just how many people will eventually be infected or for how long the COVID-19 virus will continue to spread.

The main impact at this stage appears to be via a loss of tourism and major disruptions to supply chains.

Already we have seen a “run” on local supermarkets and equipment suppliers for certain items such as toilet paper and computer equipment.

In the past week, more companies and schools have enacted coronavirus response plans, many of which involve travel bans, cancelling large scale gatherings and even sending workers or students home.

Kevin Hassett, former Chair of the President’s Council of Economic Advisers in the United States, who was in Australia this week, said the likelihood of others going into complete lockdown like Italy was now very high.

Modelling out of the Australian National University (ANU) suggests that the broader Australian economy could potentially contract anywhere from 2 per cent to 8 per cent over the next 12 months.

The study, led by former Reserve Bank Board member, Warwick McKibbin, draws on previous modelling of the impact of the 2002 SARS pandemic, and reflects the impacts of the virus on trade, productivity and confidence.

With respect to trade, the study notes that China now accounts for one seventh of all Australia’s exports, particularly mineral exports like iron ore, which represent more than $60B a year.

Against this backdrop, the Australian government has thrown out its forecast for a budget surplus this year and is quickly putting together an economic stimulus package and, with little room to cut interest rates any further, the focus has shifted to fiscal stimulus.

On Monday, March 9, Scott Morrison began to lay the groundwork for the first round of measures at the Australian Financial Review Business Summit in Sydney.

“This is a Team Australia moment,” Morrison declared.

“How you support your customers, suppliers and employees during the next six months will say more about your company, your corporate values and the integrity of your brand, than anything else you could possibly do otherwise,” the Prime Minister said.

The subtext is that the government is leaning on business owners to keep workers on, on paid leave if required, and to ensure that they pay their smaller suppliers on time.

On Thursday, March 12, the government announced it would throw $17B at the economy.

As at 2pm Thursday (March 12), the specifics were only just beginning to trickle through, but the initial round of measures appear to include a one-off payment of $750 for pensioners and Newstart recipients.

The payments will be available to pensioners, social security, veteran and other income support recipients and eligible concession card holders from March 31, and (we understand) will include families receiving family tax benefits.

For businesses, the measures also included payments of up to $25,000 per company through a return of taxes withheld on employee wages, as well as investment allowances and tax breaks.

Martin said that the Central Coast has two very large, high employment sectors that are reeling from a sequence of climactic and economic shocks, the tourism/hospitality sector and the manufacturing sector.

“The Coronavirus is having a severe impact on tourism and supply chains for local manufacturers on top of the impact of the fires and floods as well as weakening consumer demand.” Martin said.

“Around 21 per cent of local revenues are export based and there has been a sharp drop in global demand,” she said.

At a practical level, Martin said that many local businesses are also grappling with revised working arrangements for staff and managing personal leave requests.”

In addition to the Federal Government measures, Business NSW is calling on the NSW State Government to bring forward the proposed increase in the threshold for payroll tax exemptions to $1M for small business, as well as targeted stimulus to help business prepare for recovery after the spread of COVID-19 peaks.