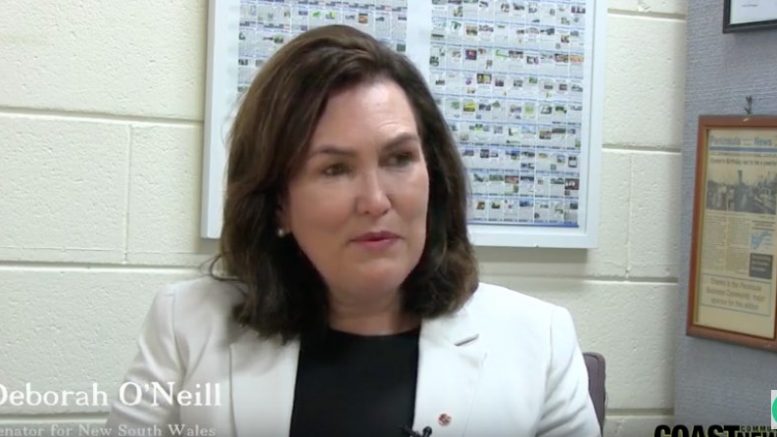 Senator Deborah O’Neill is determined to hold the State and Federal Governments to account for funds promised for the Central Coast in the lead-up to the 2019 federal elections and previous elections.

She is demanding answers on when money pledged for vital works will be made available.
Senator O’Neill said she was concerned at how much announced funding was still “missing in action” and had met with Central Coast Mayor, Lisa Matthews, to discuss the situation.
“Council can’t do the work without the promised funds in their accounts,” O’Neill said.
“We need to really keep on making these governments do the things they said they would before the last elections.”
O’Neill said among promised funding yet to be delivered were: $36.7M in roads funding; $4.3M for North Avoca Roads and Footpaths; (a share of) $50.6M for an Industry Training Hub; $20M in combined State and Federal funding for a Regional Performing Arts Centre; and $7M for an innovation hub.
She said nothing had been done on $35M promised for upgraded car parking at Gosford and Woy Woy railway stations.
O’Neill said local Liberal MPs needed “to come clean” about when coast residents can expect the promises to be fulfilled.
But Member for Robertson, Lucy Wicks, said the Federal Government was continuing to deliver on its commitments across the Central Coast.
She said the Government had delivered a $70M Central Coast Roads Package.
“Upgrades to 20 of the 29 roads will have commenced by the end of next year.”
She said $50.6M had been invested in 10 Industry Training Hubs across the country, with the Gosford Hub due for completion in early 2021.
Regarding the $35M commitment to extra car parking at Gosford and Woy Woy train stations, Wicks said scoping and development activities, undertaken by Central Coast Council, were underway to determine suitable locations.
“The Government has proved it can deliver on its promises,” she said.
“For instance, the Central Coast Medical School and Research Precinct is currently under construction.
“This has been made possible due to the strong collaboration between the Federal Government, the NSW State Government and the University of Newcastle.
“I have been actively working with both state and local stakeholders to ensure that these projects are being delivered for the community, as well as getting regular updates from my fellow Liberal MPs on the Central Coast.”

O’Neill’s vision of fairness for all