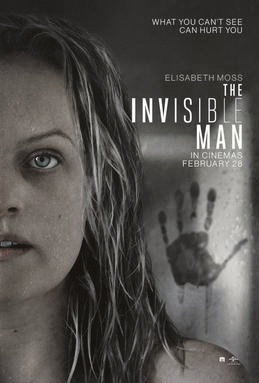 The Invisible Man, an Australian-American co-production written and produced by Melbourne-born Leigh Whannell has already made quite an impact at the box office, grossing over $100 million.
It is a psychological thriller, based loosely on an H.G. Wells novel first published in 1897 (A Grotesque Romance) and based on the genre of villians referred to as “classic monsters” (often technology-assisted) like Frankenstein.
Older film versions have told the story from the perspective of the Invisible Man as a warning against hubris and grandiosity.
Whannel’s version however, presents the story from the perspective of a female victim, Cecilia Kass (Elisabeth Moss) and, watching it on International Women’s Day against a backdrop of a worldwide push to end violence against women, it takes on a whole new perspective.
Cecilia is desperate to escape the clutches of her at once fabulously wealthy and destructively abusive husband Adrian (Oliver Jackson-Cohen).
Adrian is also an optics engineer, a leader in the field of surveillance technologies.
The pair live in a remote, modern, cliff-top home in San Francisco, surrounded by high concrete walls and extensive security.
Adrian controls everything about Cecilia — where she goes, who she talks to, what she wears, what she eats.
Cecilia drugs Adrian and flees in the middle of the night with the help of her sister, Emily (Harriet Dyer) and takes refuge with Emily’s ex-husband James (Aldis Hodge) and his teenage daughter Sydney (Storm Reid).
She frets that Adrian will find her until, a few weeks later, she learns that Adrian has committed suicide.
It seems her nightmare may be over, but Cecilia is not convinced Adrian is really dead, especially when she senses an invisible force stalking her.
A series of unexplained experiences occur that drive a wedge between Cecilia and those she loves.
She tries to convince everyone that Adrian is behind it all.
Naturally, no one believes her.
They see her behaviour as simply a case of emotional instability, a concoction of stress, exhaustion and relief.
But as the acts against her companions turn violent, suspicions grow that Cecilia’s instability has turned to a dangerous insanity.
When she is committed to a mental asylum for a brutal murder, Cecilia decides to fight back.
The Invisible Man is an absorbing film, that draws back the sheets from a nagging social issue – the invisible nature of domestic violence, physical and mental.
How is it possible that an abusive male partner can imprison a woman against her will in a terrifying relationship, yet the rest of the world remain oblivious?
The direction is clever, with a solid build-up of suspense with lots of tense moments peering at a chair, a curtain, and empty space, looking for the faintest hint of a human form.
The camera work sometimes becomes its won character, creeping silently around the housing, peering down hallways and into nooks.
The character of Adrian is presented as intelligent and outwardly charming in a Jekyll and Hyde form, with his abusive side initially faceless and hidden.
And it subjects us to the relentless, emotional anxiety of a woman, a victim of abuse, who is “not believed” and the unavoidable solution which is that the victim essentially has to become what they behold in their abuser.
But it is Moss’s strong performance that holds the film together.
The star of The Handmaid’s Tale has a talent for looking manic, with bulging dark-eyed and a signature defiant-manic-smile.
The brief role of Tom, Adrian’s brother, is also very convincingly played by New Zealander Michael Dorman.
There’s some innovative sound mixing – a throbbing electronic (“Jaws”-like) sound – which (to me) felt a little overdone and lifted me out of the zone brielfy, but I can live with that.
I can see why – it’s a good film that plays to deep, current societal issues and well worth seeing.

Movie Review – What did Jack do?