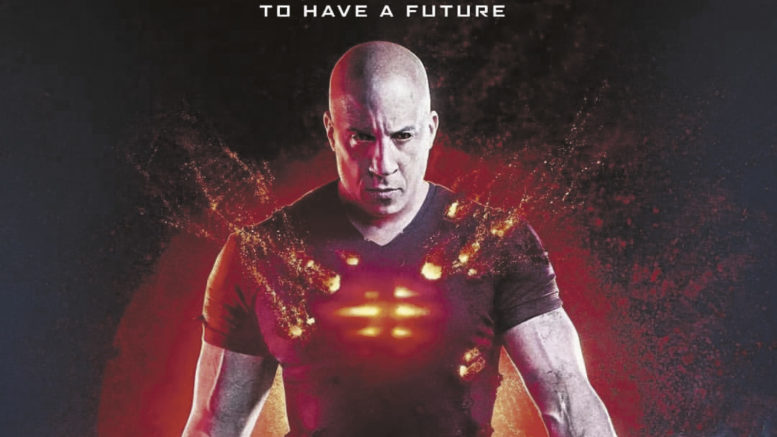 Bloodshot is a science fiction superhero film based on the Valiant Comics character of the same name.

After leading a successful rescue operation in Mombasa, US Marine Ray Garrison (Vin Diesel) and his wife Gina (Talulah Riley) holiday at an Italian beachside town when they are killed by a group of mercenaries led by Martin Axe (Toby Kebbell).
Garrison is then resurrected by Rising Spirit Tech, a company that specializes in developing cybernetic enhancements for disabled US military personnel.
The company’s CEO, Dr. Emil Harting (Guy Pearce), tells Garrison that he is the first person they have successfully resurrected using his special nanite technology.
Garrison is also introduced to Dr Harting’s other patients including former US Navy diver “KT” (Eiza Gonzales) with whom he strikes up a romantic friendship.
After experiencing flashbacks of Gina however, Garrison escapes the laboratory seeking to avenge Gina’s death.
Using the nanites to slice into computer databases, Ray tracks down Axe to Budapest and executes the mercenary.
Only then do we learn that Rising Spirit has, in fact, planted false memories of Gina’s death into Garrison in a plot to eliminate their rivals.
Garrison is then sent to kill others who he is re-programmed to believe are his wife’s killers, including Nick Baris (Jóhannes Haukur Jóhannesson).
When Baris is killed, an EMP bomb is detonated and Garrison’s communications with Rising Spirit are severed.
Upon learning the truth about Harting’s real purpose, Garrison joins forces with KT and Baris’ former programmer, Wilfred Wigans (Lamorne Morris), to try and escape the reaches of Rising Spirit and a final encounter with Harting and his deadly nanite-laden assassins.
Well, it’s easy to be critical of this film – it has received mostly negative reviews from critics around the world.
But it has grossed $25 million worldwide, so it’s not quite in “expensive flop” territory.
Many have suggested it is a solid filler for the “Fast and Furious” crowd to tide them over until the next offering from that high-paced, macho soap opera series.
Others however have described it as a poor rip-off of Universal Soldier with elements of Robocop.
There is also very little in the way of real suspense.
Since Garrison’s blood cells have been replaced with tiny insect-like nanites that knit his body back together when he’s injured, he is practically invincible.
This allows him to take hundreds of bullets, get run over by a truck, and survive point blank grenade explosions.
A select group of 14 year olds who saw it this weekend said it had some good special effects, but for the most part it was just plain “more-of-the-same” unengaging –a stream of mindless action and violence without much storyline or character development.
If they weren’t impressed, the chances are neither will you be.